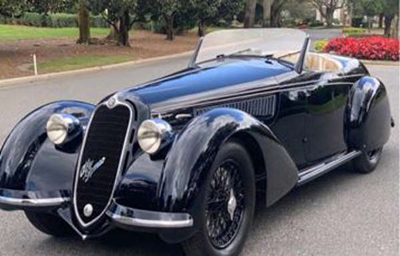 It’s not every day a rare and incredibly valuable pre-war car is stolen, but that’s exactly what happened at a motel in Latta, SC, on July 25.

Per a local report, the theft took place at a Holiday Inn Express by I-95 in Latta. The classic Italian automobile was inside a white 2009 Haulmark trailer hitched up to a 2002 Ford F-350 dually. Thieves stole the truck and trailer, which had Illinois plates, numbers 344949 and 104510TE, respectively.

Authorities disclosed there’s reason to believe whoever stole the classic Alfa Romeo knew it was in the trailer and exactly what it’s worth. Items from the car were later located in Lumberton, NC, and investigators believe there’s a strong chance the vehicle is still in North Carolina.

The 1938 Alfa Romeo 8C 2900 B Lungo Spyder is black with a tan interior. Only eight cars in this configuration were made, so hiding such a rare and highly collectible vehicle would be difficult to pull off.

Unfortunately, car transport trailers have become hot theft targets in the past several years. There are precautions you can take, such as installing an alarm system in the trailer and using trackers on the towing vehicle as well as the trailer and the vehicle being transported.