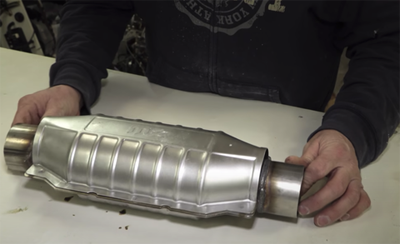 The Preventing Auto Recycling Theft (PART) Act would ensure law enforcement can more effectively address these thefts by marking each converter with a traceable identification number and establishing converter theft as a criminal offense.

“Throughout the country, we’ve seen an alarming increase in catalytic converter theft. These converters can be easily taken from unattended cars but are difficult and expensive for car owners to replace,” said Klobuchar. “By making catalytic converter theft a criminal offense and ensuring each converter can be easily tracked, our legislation would provide law enforcement officers with the tools and resources they need to crack down on these crimes.”

“The theft of catalytic converters hurts the pocketbooks of working families and small business owners already struggling with rising costs,” said Wyden. “By strengthening local law enforcement’s ability to locate stolen car parts, we will be one step closer in the fight to end catalytic converter theft.”

Catalytic converters are used to reduce the potency of toxic emissions from an internal combustion engine and required for vehicle compliance with the Clean Air Act. According to the National Insurance Crime Bureau, catalytic converter thefts rose by more than 325% from 2019 to 2020.

Replacing these parts imposes significant financial costs to vehicle owners, often between $500 to $2,300, and can even result in a total loss to the vehicle.

The PART Act would:

“Dealers across Minnesota thank Sen. Klobuchar for introducing this common-sense bill to curb catalytic converter theft. The current patchwork of state laws combined with the lack of traceability has made catalytic converter theft an easy way for criminals to make quick cash,” said Scott Lambert, president of the Minnesota Automobile Dealers Association. “The PART Act will give teeth to law enforcement by making converters traceable to their original vehicle and by establishing federal criminal penalties for this theft.”

As a former prosecutor, Klobuchar has led efforts to prevent automobile-related crimes. In April, she convened a roundtable with Minnesota law enforcement leaders to discuss ways to crack down on violent carjacking crimes. The same month, she urged the U.S. Department of Justice to prioritize resources for state and local law enforcement to address increases in carjackings.