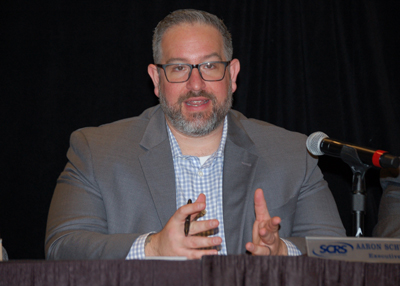 Research into the accuracy of the blend time formula commonly used in the industry is among the projects the Society of Collision Repair Specialists (SCRS) has on its docket, the association reported at an open board meeting held in April in Oklahoma City.

“Many of our members have challenged us that blend times simply aren’t realistic,” said Aaron Schulenburg, executive director of SCRS. “We hear you. We have made a decision to invest in doing more research around that, and to bring answers in a transparent manner back to the industry.

"Blending is a very challenging task, that has lots of steps and preparation, and we have long challenged that 50% [of full refinish time] formulas aren’t reflective of what’s actually necessary with the blend task.”

Schulenburg said the association also is “close to a solution” in terms of offering a health insurance plan to the industry.

“We’ve been talking for a long time about health care [and] are continuing to work on solutions there,” Schulenburg said. “I can’t reiterate this enough: The last thing SCRS wants to do is develop a solution that we don’t believe is going to be for the long-term, and ask the industry to consider it, to switch, to go through the process of doing all that, and end up in a place where a year from now you’re not in a better position than you were.

"That’s been the stumbling block for us in a lot of the solutions we’ve found. I think we’re really close to something, [and] as soon as we know that we can feel confident in putting our name and brand and endorsement behind it, we will.”

“They’re great tools for your staff,” Bradshaw said. “And something we’ve seen in our facility: If there’s a friction point on an operation between third-party payers and your staff, these videos can be a really quick and easy tool to send to [the insurer] to help them comprehend what’s going on and why it needs to be done.”

He said SCRS also will be creating some videos aimed at vehicle owners.

“As shops, we all sometimes struggle to convey an appropriate message to the consumer as to what’s going on with the claims process or why certain things need to be done or why certain things happen in the manner that they do,” Bradshaw said. “So we’re going to shoot videos that are geared toward the consumer. The shops can then use them to educate their consumer base, and hopefully make life a little easier for them.”

Also during the meeting, Danny Gredinberg, administrator for the Database Enhancement Gateway (DEG), said of about 19,000 inquiries the DEG has received over 15 years regarding missing or potentially inaccurate information in the industry’s estimating guides, more than half---52%---have resulted in a change by the information providers.

“That’s a pretty alarming number,” Gredinberg said, but also pointed to the value the DEG offers as a free resource to the industry.

Although the estimating system providers have long provided a way for anyone in the industry to submit such inquiries directly to them, the DEG was created---and continues to be funded---by a number of shop trade associations, including SCRS, as a centralized and easier way to submit and monitor what happens to such inquiries.

Gredinberg said one strength of the DEG is that it is used, and considered credible, by both collision repairers and insurers.

“I got an email from a DEG user, contesting a labor time on a replacement rear body panel part,” Gredinberg cited as one example. “He shared with me the email he got back from the actual adjuster. It started out with: ‘Alright, Robert, sorry for the delay, but just got word from on high [that] we’re good to go. They cleared the separate time on the end plate; that DEG form was worth its weight in gold.’”

Gredinberg said DEG inquiries recently have helped lead Mitchell International to add wording to its estimating guide about destructive weld testing, and the time and costs of researching OEM repair information being not-included.

Similarly, CCC Intelligent Solutions and MOTOR recently updated their estimating guide to add a labor procedure related to front bumper camera and sensor aiming, and what is not-included in the refinish time for a “minor panel” when it is being refinished independently of a major panel.

“Recently, I-CAR did a ‘Repairers’ Realm’ with Honda talking about laser brazed roof replacement,” Gredinberg said. “The week after that video got released, a repairer watched it, had a Honda in his shop, and noticed there was no way he could do that roof replacement for the time given. With that video, we were able to show the information provider, and within a couple days, they updated the time, and added some additional footnotes about one-time use parts and additional brackets and bolts that needed to be replaced as well.”