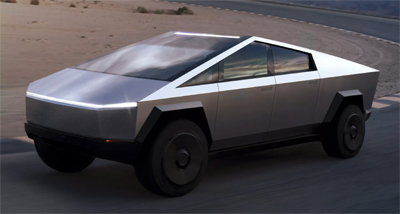 On The Lighter Side: Tesla Chief Designer Says His Favorite Design Is A Still-Unseen Secret Project

Franz von Holzhausen, Tesla’s chief designer for more than a decade, says that the work he’s most excited about hasn’t yet seen the light of day.

Von Holzhausen sat down to speak with CNBC on the occasion of his work being displayed at the Petersen Automotive Museum, for the recently opened exhibition, “Inside Tesla: Supercharging the Electric Revolution.”

Speaking to the outlet, von Holzhausen suggested that the company has an exciting new design that’s coming soon. Perhaps a new vehicle, he intimated that it was still a secret project that he was not at liberty to discuss.

Asked what his favorite design was, he responded: My “favorite one is the one that’s coming, I think. That, I can’t talk about.”

Tesla is working on preparing a number of vehicles for production, but we have seen many of those vehicles’ conceptual designs. These include the Tesla Roadster, the Cybertruck, and the Semi. Von Holzhausen’s secrecy would suggest, though, that the design referred to has not yet been revealed to the public.

A recent report claimed that Tesla is working on a design refresh for the Model 3, which will doubtless be a very important project for its design team. In addition, a smaller, more affordable hatchback (often referred to as the Model 2) is expected from the team and may be in the development phase.

After talking about the upcoming product, von Holzhausen shared his thoughts about the Cybertruck, which was the vehicle whose design he was most excited about that he could discuss.

“I’m really excited about Cybertruck,” he said. “I think this vehicle has the chance to be really radical in a pretty normal space. I’m looking forward to that shakeup and seeing one out on the street. And it’s incredibly functional. It’s not just the way it looks, it’s as functional as any of its competitors, if not more.”

He admitted, though, that the idea behind the design—putting the toughest part of the vehicle on the outside—led to some interesting challenges. For instance, because the stainless steel is so thick, it can’t be folded into complex curves, which is what led to its simple, geometric shape. It’s unclear how that will affect pedestrian safety, but its competitors aren’t exactly spectacular in that regard, either. He says, though, that the production vehicle will essentially look like the concept.

“So Cybertruck will look, for all intents and purposes, just like the one behind us,” he said, pointing to the concept truck. “It’s maybe slightly smaller, by a few percentages, but in general this is what the truck will look like.”

We thank CARSCOOPS for reprint permission