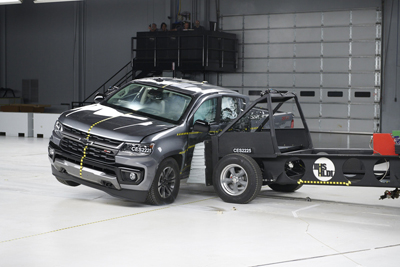 Most Small Pickups Earn Passing Grades in New Side Test

Five out of six small pickups tested earned good or acceptable ratings in the Insurance Institute for Highway Safety’s updated side crash test.

“Overall, this was a solid performance from these vehicles,” said IIHS Senior Research Engineer Becky Mueller, whose work formed the foundation for the new evaluation. “Their high ride height means that the barrier we use to represent a striking vehicle hits the strong door sill structures directly. This likely prevented excessive intrusion into the occupant compartment, except in the case of the Tacoma.”

The structure and safety cages of the good-rated Colorado, Canyon and Ridgeline held up relatively well, contributing to a minimal risk of most injuries. However, injury measures taken from the dummies indicated a possibility of a pelvic fracture for the driver of the Colorado, the Canyon and especially the Ridgeline.

The Frontier’s structure held up the best out of all six vehicles, and the Ranger’s occupant compartment was also maintained relatively well, minimizing the risk of most injuries. However, the rear passenger dummies’ heads struck the C-pillar through the side curtain airbag in both acceptable-rated vehicles.

Though measurements indicated minimal risk of most injuries for the marginal-rated Tacoma, its structure and safety cage were not maintained well during the crash. The impact from the striking barrier crumpled the door sill and B-pillar, pushing the B-pillar to within a few inches of the center of the driver seat.

“That alone pushed the overall rating down to marginal,” Mueller said. “We weight structural performance very heavily because it is tied so closely with survivability.”

IIHS developed the updated side crash test after research showed that many of the real-world side impacts that still account for nearly a quarter of passenger vehicle occupant fatalities are more severe than the original evaluation.

The updated side crash test uses a heavier barrier traveling at a higher speed to simulate the striking vehicle. The new barrier weighs 4,200 pounds---close to the weight of today’s midsize SUVs---and strikes the test vehicle at 37 mph, compared with a 3,300-pound barrier traveling at 31 mph in the original evaluation.

All six vehicles earned good ratings in the original side test.