The Department of Insurance alleges that Consumer Direct sold insurance policies and vehicle service contracts without a license and in blatant disregard of numerous, longstanding legal requirements designed to protect California consumers. The unlawful insurance policies, which promise to repair breakdowns to engines, transmissions and other parts, typically sell for $1,500 - $2,500. Chapman, Sletner and Consumer Direct each face a fine of $5,000 for every day they conducted business in California, or five times the revenue received from California consumers, whichever is greater.

Douglas Auto Body in Pasadena, CA, founder, George K. Daghlian, passed away May 22nd, leaving Takouhi, his wife of 47 years, four children and many grandchildren. His oldest son, Armen, and youngest son, Kevin, started Douglas Auto Body with George, and will continue to operate the collision repair facility.  The funeral was held at Forest Lawn Hill's Red Church on May 27th, and a memorial dinner was given at Verdugo Hills Country Club in Glendale.

George had an unusually extensive background in the collision repair industry, both in the U.S. and abroad. He began working in a body shop at the age of 13, in Aleppo, Syria. At the age of 18, he opened his own shop in Kuwait, and five years later he returned to Aleppo, and opened a shop there. When he saw that life in Syria could become difficult and even dangerous, he brought his family to the United States and opened a shop in Pasadena, in 1987. The shop grew every year until in 2006, George could celebrate fifty continuous years in the collision repair business, with a shop that had now grown to about 50,000 square feet.

Attorney General Edmund G. Brown Jr. has announced that he has asked to intervene in a lawsuit in order to protect newly adopted motor vehicle emission standards that are estimated to save nearly two billion barrels of oil and reduce greenhouse gas emissions by approximately one billion tons.

Brown filed a motion to intervene in the U.S. Court of Appeals in support of the federal Environmental Protection Agency (EPA) in a suit brought by energy companies and other industries challenging the EPA's authority to enforce the tough emission standards beginning in 2012.

"The thousands of barrels of oil spilling in the Gulf of Mexico each day are a graphic reminder that we need to cut oil consumption in America," said Brown. "These regulations would do that, as well as vastly reducing pollution from tailpipe emissions."

The fallout from the Orange County auto body sting operation which swept up 53 shop owners and estimators earlier this month has already cost many of those implicated their DRP arrangements. Several major shops involved, with the notable exception of two of the state’s three Sterling shops owned by Allstate, have already had their DRPs cancelled by their insurer partners.

Details of the specific charges are still forthcoming, but those involved will likely be charged  under CP code 550b(2), which reads, in part:

(b) It is unlawful to do, or to knowingly assist or conspire with any person to do, any of the following:

(1) Present or cause to be presented any written or oral statement as part of, or in support of or opposition to, a claim for payment or other benefit pursuant to an insurance policy, knowing that the statement contains any false or misleading information concerning any material fact.

(2) Prepare or make any written or oral statement that is intended to be presented to any insurer or any insurance claimant in connection with, or in support of or opposition to, any claim or payment or other benefit pursuant to an insurance policy, knowing that the statement contains any false or misleading information concerning any material fact.

The event, held inside the facility's glass-lined showroom, marked the culmination of years of planning, fundraising and collaboration between the college, public officials and local auto dealers. Cerritos College apportioned community bond funding toward the $5.1-million facility, and major private donors included the Southland Motor Car Dealers Association (SMCDA) and the Greater Los Angeles New Car Dealers Association (GLANCDA), who each contributed a half million dollars toward the facility. L. A. County 4th District Supervisor Don Knabe and the Conant Auto Retail Group each provided gifts of $100,000.

The largest state collision association in the U.S., the California Autobody Association (CAA), formed in 1967 by merging two organizations in Glendale and Long Beach, making it the first group to represent the industry throughout all of California. Now, at age 43 and based in Sacramento, the CAA represents 1,000 members in 18 chapters from San Diego to Eureka.

“Some of our members do have mechanical facilities, and we have dealership body shops as members, but primarily, most members are independent collision repair shops,” explains David McClune, executive director and chief operating officer for the association.

Six state board members represent the CAA executive committee. The 2010 president is Gigi Walker, owner of Walker’s Auto Body in Concord. She notes: “An association is a place for knowledge, camaraderie and keeping up to date with legal issues facing an industry—and the CAA is fulfilling all of those roles admirably.”

McClune explains that the organization has been consistently involved in the issues facing the country’s most populous state—for cars and people.

In the ‘70s, the CAA was involved when the Bureau of Automotive Repairswas started in 1972. BAR oversees automotive repair operations in the state.

CARS (California Auto Repair and Smog) in Redding will celebrate the new veterans home that is being built in Shasta County with complimentary concierge pickup and delivery for veterans’ vehicles.

A $50 million investment will create a partnership between Toyota Motor Corporation and Tesla Motors to produce electric vehicles and bring jobs back to the former plant owned by GM-Toyota called the New United Motor Manufacturing (NUMMI) plant in Fremont, CA, said the smiling CEOs on May 21.

Earlier this month Congresswoman Jackie Speier (D-San Francisco/San Mateo) launched her own exploration of the structural differences between certain vehicle safety parts by sawing through an aftermarket reinforcement bar in her San Mateo district office. The reciprocating saw she used didn’t dent the bar from the vehicle manufacturer. 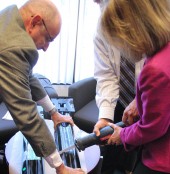 Speier, author of California’s anti-steering law, stated,  “I’m concerned that vehicle owners who’ve been in an accident are unaware that replacing a reinforcement bar with one not designed by the manufacturer may compromise the safety of vehicle occupants in a subsequent collision. Airbag deployment can be thrown off by a reinforcement bar that doesn’t absorb shock in the way intended by the vehicle manufacturer.”

Speier conducted the test with the help of two collision industry experts: Lee Amaradio, president of the Collision Repair Association of California and Allen Wood, the association’s executive director.

Amaradio stated, “The congresswoman has always taken time to hear our industry’s concerns. The issue of aftermarket safety parts is of national importance. Hundreds of thousands of vehicle owners are driving around in repaired cars that won’t withstand a collision the way the manufacturer intended.”