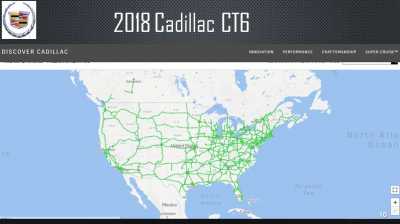 The 2018 Cadillac CT6 includes a Super Cruise capability, which allows for hands-free driving on “approved” highways shown in picture. Image taken from the Guild 21 presentation in March.

Now more than ever, it is crucial to follow OEM procedures and focus on the operations of every vehicle during the repair process so there are no surprises, according to Jake Rodenroth, director of industry relations for asTech.

“If certain procedures aren’t followed, you could either injure the person working on the vehicle or cause additional damage, which can lead to bill payer friction and delays,” Rodenroth said during a Guild 21 podcast in March, sponsored by Verifacts Automotive.

During the podcast, Rodenroth, along with Doug Kelly, CEO of Repairify, and Bram Paris, director of calibration at asTech, shared information about some of the new vehicles and technology being introduced to the market. Kelly and Rodenroth spoke about pre- and post-scanning and recalibration during a prior Guild 21 podcast in January.

“There are things that I think as repairers, we’re missing the boat on---fundamental skills that we’ve overlooked throughout the years,” said Rodenroth. “This is not going to get any easier. It’s going to get more complex.”

View the embedded image gallery online at:
https://www.autobodynews.com/index.php/blog/item/15044-following-oem-procedures-will-help-avoid-surprises-injuries-delays.html#sigProId9310be410c
More in this category: « The Best Body Shops’ Tips: Emotional Intelligence Is a Key Element for a Successfully Run Body Shop The Best Body Shops’ Tips: 10 Steps to Collision Repair Success From VECO Experts »
back to top