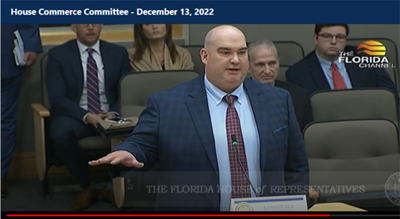 Yes, and it’s a widespread and fraudulent practice, according to three adjusters who spoke Dec. 13 at a Florida House of Representatives committee hearing.

“The insurance companies were directing file reviewers to change my estimates to repair the roofs rather than replace a totaled roof,” said Ben Mandell, a licensed all-lines adjuster. “However, the insurer was leaving my name on the estimates in a fraudulent effort to make it appear that I had written this bogus estimate.” The scheme was repeated over and over again, he said.

Another adjuster who works part-time in Louisiana also said he has witnessed the practice numerous times in both states, with insurers redacting whole sections of his reports and leaving out thousands of dollars of needed repairs.

“The problem is, they’re leaving our name on the estimates,” adjuster Mark Vinson told the committee members. “When they send it to the policyholder, they (the policyholders) are under the impression that it’s a legitimate estimate, and it’s not.”

Adjuster Jordan Lee, who also works in Texas, said insurance companies and adjustment firms have manipulated reports and deleted photographs and other key information in order to drastically limit payouts to policyholders.

The chairman of the House Commerce Committee, which had convened Dec. 13 to review House Bill 1A, an insurance crisis reform bill, said if adjuster reports had been doctored, it could mean fraud, which should be investigated by the state attorney general. Rep. Bob Rommel then met with the adjusters in his office after the hearing. Two of the adjusters said they presented the chairman with evidence---copies of reports they said had been altered by insurance companies.

Later Dec. 13, Mandell told the Insurance Journal several insurers have engaged in the practice in Florida and Louisiana. Vinson said “most carriers” in Florida and several in Louisiana have altered his reports, without his permission. Vinson said Universal Property & Casualty Insurance Co., Florida’s second-largest carrier, behind the state-created Citizens Property Insurance Corp., was one of the most frequent perpetrators.

An attorney for Fort Lauderdale-based Universal “categorically” denied that the carrier would allow such a tactic.

“That’s absolutely not the case with Universal,” said attorney Travis Miller. “The company simply has never in its history had a practice of altering, manipulating or doctoring independent adjusters’ reports for delivery to insureds.”

He suggested the adjusters had confused Universal with United Property & Casualty Insurance, which was the defendant in a lawsuit this year that alleged similar actions by United employees. The adjusters said they were not confused and Vinson said he was not aware of the United suit.

That lawsuit was brought by SFR Services, a south Florida restoration firm, and claimed to have text messages from United desk adjusters and other company personnel that instructed field adjusters to avoid estimating wind damages altogether, to downplay damage estimates in hundreds of claims, or to add false information.

A federal judge in October dismissed the suit, noting federal law leaves it to states to regulate the insurance business. A similar suit is now pending in state court in Martin County.

Mandell and Vinson are now working with Jacksonville plaintiffs’ attorney Steven Bush, who said he plans to file a class-action lawsuit against property insurers over the reportedly altered adjuster reports. The lawyer said 21 independent adjusters have come to him and are expected to be part of the lawsuit. Criminal charges may also result, the adjusters said.

He promised to provide documentation of the practices later that week. Bush also has posted YouTube videos of interviews with adjusters, speaking about the alleged actions by some insurers.

Another longtime independent Florida adjuster told the Insurance Journal that the adjusters’ allegations are no surprise to anyone in the industry.

“It’s extremely widespread,” said Mark Boardman, president of Claims Management Services Inc., based in Maitland, FL. “Can I prove it? No. But I have had a lot of anecdotal conversations with adjusters about it.”

Independent adjusters are different from public adjusters, and are often hired by insurance companies to supplement in-house adjustment staff. Until now, many have been reluctant to speak out about the purported practices, fearing they could lose out on insurance company business, Boardman explained.

Mandell and Vinson acknowledged they risk losing lucrative contracts, but they said they agreed to testify because the problem has grown much worse in recent months. If the adjusters go along with the practice, they, too, could be held culpable, Mandell said.

After the Florida Legislature’s first special session on the insurance crisis, held in May, some insurers appear to be emboldened to scrub the estimates and deny claims, Mandell said.