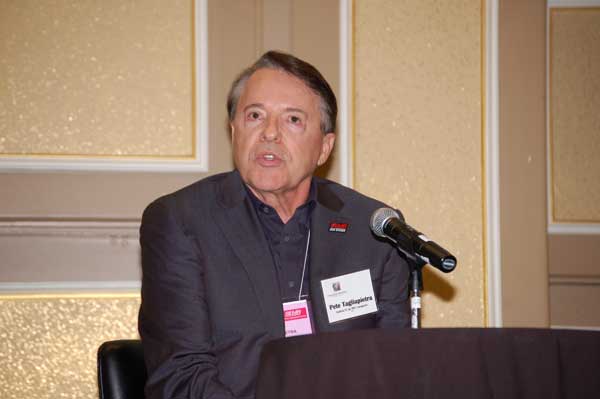 A panel during the Collision Industry Conference (CIC) in November included representatives of two automakers and two insurance companies addressing a topic that repairers and others discussed at a previous CIC: can an auto body shop participate both in direct repair and OE certification programs, and meet the requirements of both?

“I would never say that’s impossible, but it is very difficult at times,” said Ben Cid, collision business manager for Mercedes-Benz. “There are shops that do it. When you’re having to prove…why something needs to be done a certain way, there’s a lot more time invested in doing that. Again, it’s not that it’s impossible. But it definitely takes a lot more time on the shop’s side to really…prove what needs to be done.”

Sandee Lindorfer, auto line director at Allstate, said she sees it as less of a challenge.

“We have many [OEM-certified shops] within our Good Hands Network,” she said. “Between our network and the OEMs, we have more in common than we have differences. At the end of the day, we both want our customers to have a safe and proper repair. I don’t think that [needing to offer] proof of repair procedures is as great [an issue] as it may have been in the past when repair procedures weren’t easy to get your hands on.”

She said parts restrictions by the automakers are probably the primary area where there’s “friction when a shop is trying to appease both the carrier and the OE.” When those conflicts arise, she said, they are addressed “case-by-case,” based on such things as “the contract that we have with our customer” and state requirements.

“But there’s not too often that we can’t come to some sort of agreement,” she said.

With CCC Intelligent Solutions and others documenting changes in cycle time, “touch time,” parts costs and other metrics, are insurance companies adjusting the key performance indicators (KPIs) by which they are measuring direct repair shops?

In terms of cycle time and its impact on customer satisfaction, Lindorfer said insurers aren’t looking for shops to compromise repairs to return vehicles faster.

“We still want safe repairs, and sometimes safe repairs take longer for whatever reason may cause that,” Lindorfer said. “We’re not asking anybody to take a shortcut and not do what they should do.”

At the same time, she said, the growth of ADAS and other technology impacting repairs in late model vehicles shouldn’t impact all claims given the average age of vehicles on the road is 11 years.

“Let’s remember that not every car we repair is a new vehicle,” she said. “We need to be sure we’re repairing that vehicle, regardless of age, appropriately. As the market changes and we [see] more and more of the vehicles that are more complex, we’re going to see that the KPIs are going to change. We’ll change with those KPIs.”

She said Allstate has adjusted cycle time measures “over the years because of the complexity of repairs,” and good communication between shops and insurers will resolve issues about vehicles that are “out of the ordinary.”

“So I can’t speak for every insurer; I can only tell you that we do reevaluate KPIs regularly,” Lindorfer said.

“We look at the KPIs, at our scorecards, on a yearly basis,” he said. “We look at the market and the impact of the supply distribution and other factors like that.”

But panelist Pete Tagliapietra of NuGenIT said those companies’ practices don’t synch with what he sees in the auto insurance industry as a whole.

“When we look at scorecards and KPIs across the industry, some of those KPIs haven’t been updated in 10 years,” Tagliapietra said. “So repairers [on those programs] are being held to the same KPIs.”

He also noted while the average vehicle may be 11 years old, the average age of repaired vehicles is between 6 and 7 years old.

“That puts us at OBD-II and well into the new realm of technology as we know it today,” he said. “I think we need to consider that…You can’t look at KPIs based on the way we repaired cars in 1999, and hold [shops] to the same level, especially in terms of cycle time.”

Aaron Schulenburg of the Society of Collision Repair Specialists also told the panel he’s always surprised and concerned when anyone suggests it’s not more challenging now than it’s ever been for shops trying to “appease both sides of the equation” when it comes to automakers and insurers, saying that’s the crux of nearly “every single call that I get every single day.”

He said he appreciated the automakers and insurers who at least took part in the panel discussion because the committee struggled to find people willing “to sit on the stage to talk about the things that really matter.”

“There should be more who do,” Schulenburg said. “If they’re not willing to, there’s a bigger issue in this industry that’s leading to shops being stuck in the middle.”

More news from the November CIC meeting: Fully Automated AI Collision Repair Estimating ‘Not There Yet’