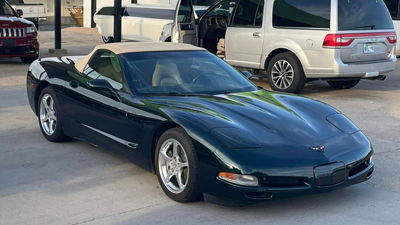 A dealership in Tulsa, OK, is missing a couple of cars thanks to the owner not locking up a personal vehicle sitting six miles away.

Per a local report, thieves swiped a green 2001 Chevy Corvette convertible and a 2011 Chevy Silverado from the lot at 2nd Generation Motor Co. early in the morning of Oct. 10.

Thankfully, both vehicles were quickly recovered, but the owner seemed perplexed by the crime, saying it was the first time anyone had boosted a car from his lot.

It all started when someone didn’t lock the guy’s Dodge Challenger. In the trunk of the Mopar were about 40 keys from cars belonging to the business, including the maroon 2014 Chevy Camaro SS, which was sitting in the driveway of the dealership owner’s private residence.

While the Corvette and Silverado were recovered, police are still searching for the Camaro and the suspects. The owner of 2nd Generation Motor Co. is offering a $5,000 reward for information leading to the thieves’ arrest and recovering of the muscle car.

Motorious has repeatedly warned about the dangers of leaving your car unlocked. This isn’t a great idea during the daytime, but at night it’s even worse.

One of the explanations for this phenomenon is keyless ignitions have caused people to become lazy. Instead of having to take the keys out of a pocket or purse when approaching the car, we now just have to press buttons and that’s it. Some have taken it a step further and just leave the key in their car all the time.