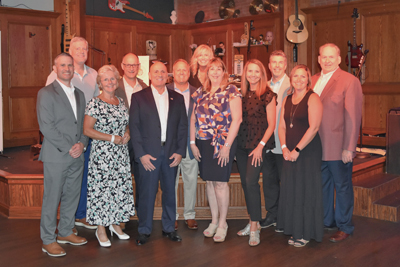 At any moment, someone in the collision repair industry could be impacted by a natural disaster or other catastrophic event.

“If that were to happen, the Collision Industry Foundation (CIF) ensures that others in our industry will be there in support,” said CIF President Michael Quinn, who is also president of AirPro Diagnostics. “We help each other, we look after each other, and we connect the industry.”

Prior to the creation of CIF in 2001, members of the collision industry rallied donations and volunteers to perform works that would benefit organizations such as Habitat for Humanity and Ronald McDonald House. Although their efforts were successful, Quinn said they were the result of the work of a small group of people and required a substantial personal investment in time and administration.

CIF project leaders discussed building a foundation to coordinate fundraising, create committees, gather volunteers and brainstorm. At the time, volunteers had committed to raising $500,000 toward constructing a medical center for Camp Make-A-Dream, a free camp for children with active cancer. They realized it was no longer possible for a handful of volunteers to coordinate a project of such enormity.

The organization’s mission is to provide emergency relief by securing and distributing donations to collision repair professionals who have experienced significant losses due to natural disasters or other catastrophic events. That assistance can be monetary, connecting individuals with suppliers or other industry providers, and/or lending a hand to rebuild or retool.

Since its inception, CIF has managed the funds donated to support charitable and educational causes in the collision industry. They are disbursed after trustees, selection committee volunteers and leaders review the projects. Due to the complexity of some projects, CIF funds the foundation’s administration.

In the early years, CIF worked closely with the National Auto Body Council (NABC), whose members suggested worthy causes. Some of the charitable projects funded by CIF have included donations to local causes, including children’s hospitals and abused women’s outreach programs; donations to sponsor student participation at the 2005 WorldSkills competition and fund the purchase of a handicapped accessible school bus for Camp Make-A-Dream; and The Hurricane Katrina Disaster Relief Fund for collision industry victims. Following Hurricane Rita, the Disaster Relief Fund was created to aid industry victims of any natural disaster.

Until 2020, CIF coordinated fundraising to raise money for specific disasters. Members of CIF’s Board of Trustees typically reach out to organizations that have donated in the past or they feel would be good candidates. The CIF Gala, typically held annually in January, has been a major fundraiser for CIF since 2010.

During the pandemic, the need for assistance was widespread across the country due to layoffs and reductions in work hours at collision repair shops. Hundreds of individuals found themselves in need of assistance. Quinn said this differed from past disasters or catastrophic events that were tied to a particular geographic area or location. CIF had not dealt with a situation of this magnitude.

CIF used the reserves in the Disaster Relief Fund to make an initial commitment of $100,000 to assist those impacted by COVID-19. The organization also put out a call to the industry for donations. The outcome was raising an additional $150,000 that was dispersed to individuals in need. CIF Trustees vetted each request and responded to more than 700 requests for assistance from 38 states.

Through the pandemic, CIF implemented new methods of fundraising. These included online events, such as a magic show and a silent auction.

In addition to the call for pandemic assistance, in 2020, CIF participated in Giving Tuesday, a national day of philanthropic support. Forty donors contributed to these efforts. The organization has continued to participate in Giving Tuesday for the past two years.

The CIF Annual Donor program was introduced in 2021 so it would be easier for industry organizations to make an ongoing commitment to CIF, streamlining the donation process for CIF and supporting organizations. There are currently 36 donors, up from 23 annual donors in 2021.