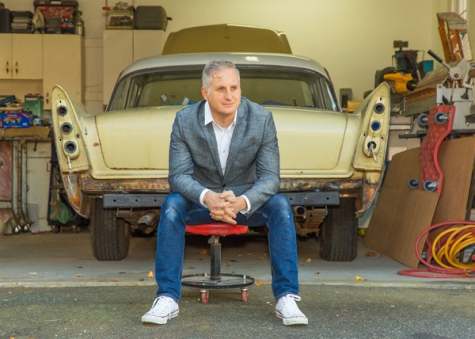 His latest product is Capture the Keys, a software product that can target and pinpoint potential customers who have physically visited competing shops. It’s totally legal and ethical, and has been highly effective in gathering viable leads for Zoebelein’s shop customers since he unveiled it in 2020.

Stratosphere Studio has evolved with the collision repair industry since it opened its doors in 2011.

“Back then, we were doing primarily digital marketing for body shops---websites, blog content, email marketing and some consumer advertising, and it worked very well for a while," Zoebelein said. "We found out about geofencing back when it was new, and thought, wow, this is the perfect thing for body shops because you can actually target people that are walking into a facility. I realized that geofencing was the solution, as long as it’s used strategically employed the right way."

The biggest question is how to find that customer immediately after they get into an accident.

“Collision repair marketing is like trying to catch lightning in a bottle,” Zoebelein said. “You have to know when the lightning is going to strike in order to be able to put your lid on the jar, right? So, with geofencing we know if somebody's walking into a competitor's location and they’re not a vendor or an employee, they're in the market.”

I could write 5,000 words to describe how geofencing works, but Zoebelein can do it in less than 60.

“In short, geofencing enables a user to capture any device’s ID's and Mobile Ad ID's (MAIDs) for any device that enters a fenced zone," he said. "Then we can serve ads into the app’s websites and social media feeds of that device. You can also track that back to the activity that the device does after it has been served an ad, such as counting it as a walk-in.”

Once Zoebelein saw the potential benefits for using geofencing, he began telling his shop customers about it in 2019---but without luck, at least initially.

“It fell on deaf ears at first,” he said. “Nobody was really ready to jump in on the technology at that time. So then when COVID happened, people were starting to hear a little bit about geofencing for shops. One of my shop customers called me and said that he scrubbed down his frame machine for the second time, and his paint booth was spotless. He said I need to get some cars in here, so let's give that geofencing thing a shot; what's the harm? It generated a few walk-ins that clearly came from a competitor’s location. And so, I thought, wow, we might be onto something here.”

Further testing led to the collection of solid leads, and soon Stratosphere decided to offer Capture the Keys to its clients, primarily independent shops.

“We went to another shop with two locations in Pennsylvania and asked them if we could test it with them and they said sure," Zoebelein said. "So, we ran a second test and had similar positive results. So that’s when we decided to launch geofencing as a service, and then eventually we turned it into a product.

"It includes Facebook ads, Instagram ads, as well as Instagram and Facebook content, with geofencing and an in-depth reporting feature," he continued. "It enables us to show our customers every two weeks how many leads we’ve collected. We send them a video walk-through of all the numbers and it shows how many phone calls they receive, how many walk-ins they get, how many lead submissions they collect and how many clicks they receive from the ads.”

Capture the Keys helps shops with their search engine optimization (SEO) as well.

“They see an immediate 30-35% increase in traffic to their Google My Business page," Zoebelein said. "We officially launched Capture the Keys at Kristen Felder's first World's Fair & Expo in 2020 and that's when it really took off for us. Shops can send postcards to people all day long. TV and radio does a good job to build awareness, but it's a really inefficient way of getting in front of people who are buying right now.

"The best way to get in front of buyers is to be able to identify them in real time, and we can do it with geofencing.”

Stratosphere is working with a company that tracks devices back to where the phone spends the night, and from there they can tell the physical address and name of the head of household. In some cases, it can pull email addresses in as well.

“I can even tell you the year make and model of their vehicle, and even get their birthday in a lot of the cases,” Zoebelein said. “We draw these fences around our customer’s competing locations---whether they’re another body shop or a dealership---including their parking lots.

"One of the reasons why geofencing works so well is due to the fact that it doesn't care what you look at online," he said. "It'll start serving ads because it's tracking the device, not the user. Many of our clients are getting a considerable amount of walk-ins with people sending in photos of the damage, and filling out submission forms immediately after getting into accidents, and it all happens because of geofencing.”

So, what happens when somebody starts getting a banner ad on their device via geofencing?

“First, they'll Google the shop by name,” he said. “So, this is different than doing an auto body repair search. The idea is that you're going to find your body shop by searching for it online even if that was the only thing available to you. It's a guaranteed branded search, so we actually don't care where they click once they're there.

"If they want to go to the website, Yelp or Facebook, it doesn't matter," Zoebelein said. "Accessing the shop’s Google My Business page is the last mile in any buying decision for auto repair and it just makes it the very next step. Everything they need to know about the shop is right here. They can read reviews on the shop, see photos of the shop, they can book an appointment right from there or just click to call. They can click to get directions or even save it to their phone to access later.

"The third thing the user can do is then click on the ad, which takes them to a landing page that explains why they should consider getting a second opinion outlining all of their services, certifications and capabilities.”

Zoebelein explained Stratosphere is in the mind-changing business, and Capture the Keys can also help the fight against steering.

“Capture The Keys was designed to help collision repair facilities combat insurance steering through a proprietary blend of geofencing and paid media strategies,” he said. “It is designed to find prospects and get a 'second opinion quote' from our body shop customers. Leads are handled through our own custom-built CRM for collision repairers and remove the friction in the transition from prospect lead to paying customer."

The blogs Stratosphere creates for its customers are built to inform and promote the industry as a whole.

“We've rewritten just about every single OEM position statement out there in layman's terms,” Zoebelein said. “I like to say we reinvented the blog. It's not strictly for SEO, but more for customer education and to solidify the fact that each one of our body shop customers is the No. 1 industry expert in their particular region. The whole point in advertising in simple terms is to find, identify and connect the buyer with the seller of a service or product, and we can achieve it all with geofencing.”

Fifty shops are currently using Capture the Keys and Zoebelein is looking to work with 50 more. Each shop’s region is protected and spots are limited.

So, if you’re on the fence about geofencing, maybe this article will prompt you to consider this technology and its benefits for your business.