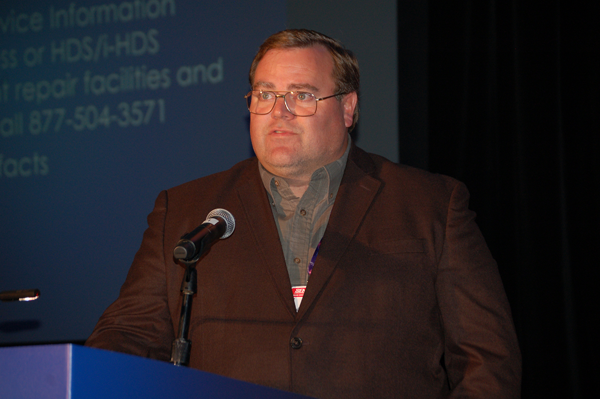 The importance of proper ADAS calibrations was a key focus as the Society of Collision Repair Specialists (SCRS) brought collision repairers and automakers together at an event in Las Vegas during the SEMA Show.

Scott Kaboos, assistant manager of collision repair training and technology for American Honda, told those attending the OEM Collision Repair Technology Summit that automakers call for many calibrations to be done on a level floor with good reason.

“We did a little test,” Kaboos said, noting Honda’s service information says there can be no more than 1 degree of pitch or slope to the floor when performing calibrations. Traveling around to a lot of our dealerships, we found that most of their floors do not meet that requirement. So we started asking ourselves: How important is this? Is this really detrimental?”

Kaboos said the Honda training center in Illinois drove a new Civic at the NHTSA target used to test emergency auto-braking, and the system worked 10 times in a row, stopping the vehicle three or four feet from the target as designed.

“So then we took that same car and put the rear wheels in our drain in our wash bay at our training center,” Kaboos said. “We calculated the slope on that, and found that the car was sitting at a 1.6 degree incline. We re-aimed the radar, using the factory specifications and tools. When we were done, the scan tool said aiming was complete. There were no codes. We test drove the car around the block. It gave us no indication there was anything wrong with the car. There were no lights on the dash.”

But then the vehicle was driven at the same NHTSA target.

“We had very different results,” Kaboos said. “It honestly blew through that target at 20 miles an hour like it wasn’t even there. The light on the dash didn’t blink. It didn’t beep at us. It just punted that target. That was a big eye-opener to us on the training side as to how important that one little line in the service information is: do this on a flat floor.”

Kaboos said the other noted requirements---proper air in the tires, a full tank of gas---are also important.

“Anything that changes the ride height or ride angle of the car is going to throw off all the geometry,” he said. “You’ve got to pay attention to all of that.”

Subaru of America’s Ted Hicks said during the same SCRS session that complete repair of the underlying metal where an ADAS camera or radar is attached is also critical.

“I asked a panel of technicians in Dallas: what’s the single biggest problem you’re having with calibrations of blind-spot monitoring radar units and the EyeSight cameras that come from body shops after a repair,” said Hicks, a regional technical training manager for the automaker. “They said that the panel that the camera or unit mounts to has got to be exactly correct. If the sheet metal behind it is bent, the radar unit or camera will never point in the right direction.”

One problem: that metal is often behind trim or covered by the bumper cover, so some shops may not repair it.

“Nobody cares what the sheet metal looks like, right,” Hicks said. “It can be wrinkly as all get-out and nobody’s going to care because the bumper cover is going to cover it or the EyeSight camera is going to cover it. I’m here to tell you: It matters. Please find the reference points in the service information.”

He estimated between 5% and 10% of Honda’s certified collision centers are doing their own ADAS calibrations in-house, while some use a mobile service or a stand-alone calibration center in their market.

“But still, the majority are subletting to the dealers,” Kaboos said. “I’m not going to make a judgment either way, as long as you’re getting it done properly.”

He said CCC Intelligent Solutions pulled final repair appraisals for Honda vehicles over the course of a year that “had an event that would have required a calibration of one of these systems.”

Of those, only 20% listed a calibration.

“Eighty percent of the cars that were in accidents that needed to have a calibration did not get one,” Kaboos said. “At least it wasn’t on the estimate. So unless they did it for free, and they didn’t put it on the estimate---highly unlikely, right---it didn’t get done. That scares me.”

Also during the session, Taylor Jozwiak, collision R&D workshop manager for Rivian, talked about how that new company produces collision repair procedures for its vehicles. Jozwiak said his “internal body shop” in California, which includes body and paint technicians and an “estimating specialist,” works closely with the Rivian service engineering team, “which creates our repair procedures in CAD.”

“As we all know, CAD is great from an engineering standpoint, but some things get lost in translation when transferred over into reality," Jozwiak said. “So that’s where my team comes in. We take the repair procedures and validate them on bodies in white, looking for accuracy, quality of repair and ultimately safety. If we find any discrepancies or things that should change, we provide that feedback to our engineering team, and they make the necessary adjustments to repair procedures. At the end of the day, we want to make sure the people out in the field, the people in your shops, are getting high quality repair information.”

“We try to replicate what the technicians are using in shops---the tooling, the equipment,” Jozwiak said. “We use all the same stuff as a traditional body shop would. We collect those times, and that helps us publish times in the estimating systems.”