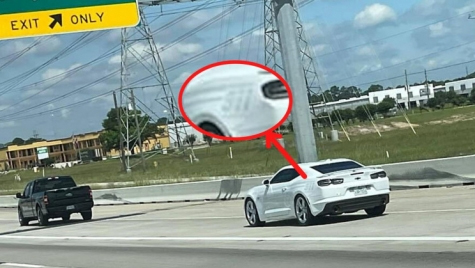 It's an all-too-common occurrence. Someone is speeding a little too fast and suddenly they see a hard-to-miss police car. They stop in their tracks and slow down just in time. But what if they couldn't spot the police car?

Houston, TX-area Harris Country Sheriff's Office has a new fleet of cars and instead of the usual clear writing, the vehicles are equipped with ghost decals that blend into the cars' paint, making it difficult to spot on the road, reported CHRON. They also don't have the top emergency light.

According to the Harris County Sherriff's Office, the ghost decals are meant "to support our multi-pronged efforts to get dangerous drivers off our streets so that we might ultimately shed our region’s dubious distinction for having the nation’s deadliest roads."

The new fleet of police Chevrolet Camaros looks just like regular cars from most angles, meaning they can operate inconspicuously. Their presence, however, may not be well-received by civilians.

Unmarked police cars have often been a contentious subject. Civilians argue they are just used to issue more fines and burden them economically.

Their proponents, however, argue they add an extra layer of safety to the roads as drivers will be forced to behave more carefully knowing they can be caught at any moment. The new cars are an in-between of completely unmarked vehicles and regular police cars.

When stopped by a ghost car, civilians can be certain they are indeed being accosted by the police as the decals will be visible up close. This can assuage fears that impostors might be playing cops.

The latter seems to be the only real advantage to having the decals as for all other purposes it would be more convenient for traffic police cars to be completely unmarked. Regardless, a Twitter user has already begun warning people about the new discreet cars. How many drivers will be caught off guard?