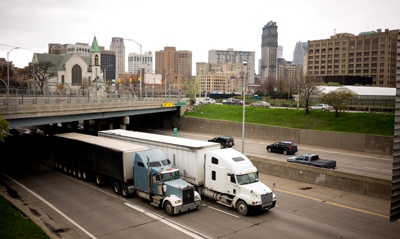 The Michigan Department of Transportation has commissioned a study about enacting highway toll roads to raise revenue to fix roads.

The study follows a growing tax revenue hole from increasing fuel efficiency that leads to fewer fill-ups at the pump and more electric vehicles whose drivers don’t pay state or federal fuel tax.

Michigan roads lost out on $50 million in state gas tax from 2019-2021 because EVs charge instead of filling up at the pump.

The study found toll roads could raise a substantial amount of revenue, but estimated capital costs for toll installation is about $10 billion.

If Michigan implemented a toll system at six cents per mile on a 1,200-mile toll system, the estimated state revenue would approach $2.2 billion. The study said the state could use the initial revenue to leverage more debt for the project. The study said interstate tolls on I-69, I-75 and I-94 would account for a majority of the revenue.

However, costs would eat into revenue and only leave about 67% of funds to the state after paying 19% for toll operation and maintenance, 9% to fund road maintenance and 5% to fund a discount program for people with low incomes.

Other challenges include that drivers might seek alternate routes if tolls are too high, and the extra cost would fall primarily on Michiganders, not out-of-state drivers.

Michigan doesn’t spend all the money it collects from roads and drivers to fix driving infrastructure. A 2022 study from the Reason Foundation and Mackinac Center found Michigan diverts 8% of fuel and vehicle registration fees from fixing roads. The report found in 2020, Michigan collected $3.17 billion in fuel taxes and vehicle registration fees, but only $2.92 billion was distributed to fund state, county, city or village roads.

In fiscal year 2021, about $3.4 billion of revenue was generated for the Michigan Transportation Fund. The funds are comprised of motor fuel tax (39%), vehicle licensing and registration fees (42%) and general fund sources, mostly from income taxes (19%).

“Administrators could have studied changing the current road funding policies to a user-fee model that encourages more efficient and finance of infrastructure,” Hohman said in a statement. “Instead, they chose to study toll roads to get more money."

Hohman said lawmakers should prioritize road funding for state revenue instead of asking Michiganders to pay more money, on top of fuel taxes.

“Elected officials are close to the point where roads are being fixed faster than they fall apart," Hohman said. "They got there by making roads a priority for the state’s growing revenue. They don’t need to hit drivers with highway tolls to get to better road quality.”