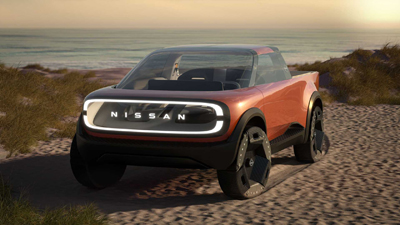 Nissan Could Ditch Titan, Pivot to Smaller Electric Pickup Instead

It has been rumored for months that Nissan is looking to cut the Titan full-size pickup from its lineup, possibly because the model has been underperforming in the sales charts in recent years.

New information now says regardless what happens to the Titan, Nissan will also develop a smaller, fully-electric pickup that could debut in the next few years.

According to Automotive News, the Nissan Titan could be axed in 2024 or 2025---the earliest the electric pickup could debut. The source quotes an unnamed Nissan insider with knowledge of the matter, who said about the Titan, “there's no plan engineering's working on for replacing it, updating it. It's dead."

This upcoming midsize electric truck from Nissan may have been teased in 2021 with a concept called the Surf-Out, but don’t expect it to look quite that extreme when it does hit production. The concept, which has a see-through front fascia and a digital panel that can display messages on the tailgate, hints at what kind of look Nissan will be going for with this model.

It most likely won’t be a single-cab pickup like the concept either. Should Nissan choose to enter the midsize electric pickup segment and deliver a single body style, it will probably be some kind of crew cab design, an electric alternative to the Frontier, which was updated last year and will surely stick around until the EV arrives.

Nissan Dealer Advisory Board Chairman Tyler Slade does not think abandoning the full-size pickup segment is a good idea. He believes having pickups in several segments is key to these vehicles’ commercial success, although he does admit having an electric equivalent to the Frontier in the range would make a lot of sense for Nissan.

He also believes there is economic incentive for truck customers to switch from burning fuel to fully-electric since “trucks typically get the worst gas mileage, so making them electric will reduce operating costs.”

This electric pickup might be one of the two EVs Nissan intends to build in the U.S. at its Canton, MS, assembly plant. The manufacturer previously announced it would invest in this factory to prepare it for EV manufacturing and the first EVs would start rolling off the production line by 2025.