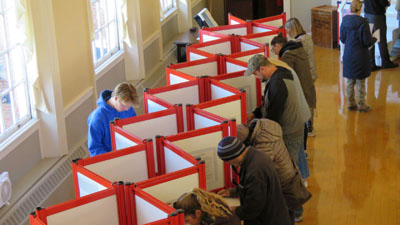 Maine Voters Likely to Decide on ‘Right to Repair’ in November

By the time Mainers get their spring tires put on, the waiting room of their local automotive shop might be decorated with political signage.

You might not think who is allowed to repair a vehicle could be a political discussion, but it will be one of the four likely ideological skirmishes waged on the airwaves and roadside signs as Maine gears up for a referendum-heavy year.

Unlike 2021’s bruising campaign over whether Mainers should block Central Maine Power’s hydropower transmission line from Canada from coming through the Kennebec Valley, multiple ballot questions will be up for debate in 2023.

Among them is a debate on who should get access to telemetric data from a customer's vehicle for repairs, which is likely to make the ballot.

The other three include a question asking if Mainers want to establish a consumer-owned utility, and buy out CMP and Versant Power, which has been approved for the November 2023 ballot. Opponents have a counter referendum aiming to hobble the consumer referendum by making government bonding over $1 billion subject to voter approval. That one is also likely to make the ballot.

Finally, an effort to prohibit companies with foreign ownership from spending in referendum campaigns has been certified.

If all four are voted on in November, it will be the most questions on the ballot since 2016, according to state records.

Trends and fights in other states over similar measures indicate next year’s battles, if they do make the ballot, will cost millions and flood the airwaves with commercials.

The concept of “right to repair” has been around for years, but one of its first major battles took place in Massachusetts a decade ago. A right to repair coalition---a group of automotive aftermarket companies that create, distribute and sell vehicle parts or perform vehicle services---brought forward a ballot measure to require motor vehicle manufacturers to grant access to vehicle diagnostic and repair information to independent repair shops.

That referendum passed with 88% of the vote in Massachusetts. And car manufacturers, rather than fight the same battle in 50 states, chose instead to create a memorandum of understanding between themselves and the aftermarket industry to make that information available nationwide.

But Timothy Winkeler, president and CEO of VIP Tires & Services and the lead proponent for Maine Right to Repair, said the memorandum does not cover the wireless diagnostic information common in newer cars. The Massachusetts right to repair campaign took the issue to the ballot box again in 2020 and won, and Winkeler hopes Maine will be the second state to make this information available to independent repair shops.

“This is about consumer choice,” he said. “It’s about your ability to choose who repairs your car.”

Winkeler said there has not been much strategizing on how to message around the referendum, but imagines once it is certified by the Maine Secretary of State’s Office, which he expects in January, posters will start popping up in repair and parts shops advocating for the measure.

It is certain to meet resistance from the car manufacturing industry. The Alliance for Automotive Innovation, one of the main opponents of the Massachusetts referendum, sent out a memo outlining its arguments against the proposed Maine measure. It accuses the aftermarket industry of going for a “data grab” that would allow it to create targeted ads toward car owners. It also said the measure is unnecessary and could open up vehicles to cybersecurity risks.

The alliance’s resistance was so strong, automakers have been fighting it in court for two years.

The Maine campaign could be expensive: The Massachusetts campaign finance website shows a collective $51.6 million on the referendum in 2020, with opposition slightly outspending support. At the time it was projected to be the single most expensive ballot initiative in the state’s history, the Boston Globe reported.

A movement to block referendum spending by corporations with foreign backing has no organized resistance---yet.

This story was originally published by The Maine Monitor, a nonprofit and nonpartisan news organization covering statewide news in Maine.