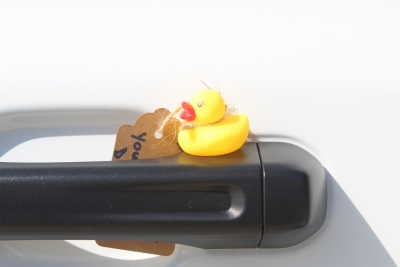 There is arguably no other vehicle ownership culture that is as unique and vibrant as Jeep ownership, or to be more precise Jeep Wrangler ownership.

It’s more than the many Jeep clubs that exist around the country, more than the ubiquitous off-roading events, more than the obligatory “Jeep-wave” as two Jeep drivers pass in traffic. It’s a culture of “go anywhere and do anything” with the top canvas and doors on or off – and just have fun. And now, borne out of the depths of the COVID pandemic, is a new, fun, Jeep-ownership ritual – “Jeep Ducking.” It all started in July, 2020 in Canada. Allison Parliament, a woman who lives in Orillia, Ontario, Canada but also works in Alabama, and sports Alabama plates on her car, had just returned to her Canadian home, quarantined for the two prescribed two weeks, and had just had a negative test for COVID.

She went out in public and was approached by a stranger who physically attacked her. The man cursed her and told her she was not welcome in Canada. Whereas Canada had a relatively low-level bout with the pandemic, many Canadians were skeptical of seeing Americans coming into the country and possibly spreading the disease.

But Parliament didn’t get angry. Instead, she wanted to do something that was fun and would bring smiles to people, especially in such a tough year. So… she and her friends bought a little yellow rubber duck, and placed it on a Jeep they saw parked nearby… and waited. The Jeep’s owner liked it and considered it funny. Parliament put the incident...

...on social media and the craze took off. As this piece is being written in early November, less than four months after the first Jeep was “ducked”, there are at least 15 different Facebook sites dedicated to Jeep-ducking encompassing almost 70,000 Facebook posters. Some groups are smaller being state or regionally oriented. The biggest gathering of Jeep-duckers is the original site with over 28,000 participants.

Some “duck-ers” write a message on their little toys in indelible marker for the “duck-ee” to see. Others attach small tags to the ducks allowing a longer message to be written. It has even gotten to a point where professionally made tags are now available for sale.

The tags will usually say something like, “Nice Jeep – you have been ‘ducked’ by a fellow Jeeper. Please take a photo and share the joy at #duckduckjeep.” Most ducks used are the traditional yellow. But ducks of different colors are also acceptable. Some even come designed in different motifs such as a fireman or police officer or super hero. All models of Jeeps are open to ducking. There are no “official rules.” However, people who drive the Wrangler model (known for years as the CJ model) are more likely to “duck” a fellow Wrangler. That’s not to say that the “duck-er” needs to be actually driving their Jeep while doing the “duck-ing.”

Some will even do the “chuck-a-duck” – tossing a duck to another Wrangler while stopped in traffic or the “pass-a-duck” – handing a duck to a fellow Jeeper stopped at a gas station. Photos of “ducked” Jeeps have shown up on Facebook sites in all 50 states in the US, all over Canada and reportedly, even in Spain and Australia.

In a newspaper report, Parliament said that there “were some haters…” people who just threw the duck on the ground and drove off. Conversely, she said she heard from some people who said the duck “helped their mental health.” Not a bad thing after all that’s happened in 2020.

Parliament noted that some Jeep dealerships have gotten into the act placing the rubber toys in customer cars when they are retrieved after being serviced. She wants to have DuckDuckJeep tee shirts made, the sale of which could raise money to help teachers buy school supplies – always a great idea to give back to your community driven by something as fun as “Jeep-ducking.”