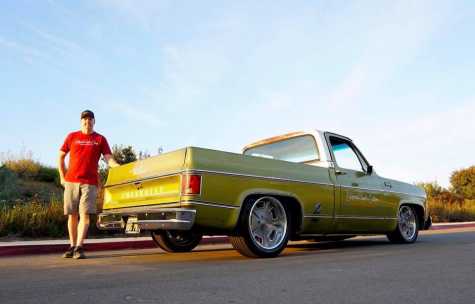 Mark Oja is best known for being the build manager on the last four seasons of the TV show “Overhaulin’,” which airs on the Velocity channel and stars automotive icon Chip Foose.

He also appeared on “American Hod Rod” and other automotive television shows.

Oja showed an interest in cars at a very young age---a passion that he shared with his late father, Alvin, who also worked on cars. By age 13, he had painted his first car.


Oja’s automotive experience included a position at a GM dealership as director of fixed operations, which he held for 12 years.

After leaving the dealership, Oja came to Huntington Beach and founded his own hot rod shop, Custom Rod Garage. Oja’s friendship with the late Boyd Coddington and his wife, Pattie, was instrumental in establishing Custom Rod Garage.

In addition to Custom Rod Garage, he owns California Speed and Custom LLC, which is the retail store located in the same building. Hot Rod, Muscle Car Power and Street Rodder magazines have featured Mark's work. Some of the cars that appeared on “Overhaulin’” now are located at the shop.


California Speed and Custom sells auto body supplies from 3M Automotive Aftermarket and other companies. The company’s website, californiaspeedandcustom.com, features a merchandise shop that includes t-shirts and accessories. Every weekday, the shop’s store is open from 8 a.m.—5 p.m., and tours open to the public are offered from noon—1 p.m. 3M products are extensively used in the shop’s auto body and collision repair work.


Autobody News reached out to Oja for his latest news. Oja shared that his shop is currently working on a large and involved exclusive project: 50 supercharged 2019 Ford Mustangs with carbon fiber wide bodies and custom interiors. The Mustangs will also feature one-off wheels designed by Custom Rod Garage.


Oja stated that the Mustangs will feature custom colors that he designed for PPG.


"PPG has been a great working partner and has a great ability to accommodate all of our needs for our custom colors," he said.

In April 2018, 3M Automotive Aftermarket sponsored an appearance by Oja at the Charlotte Auto Fair, which is held twice each year in Charlotte, NC. The event is described as a “home to thousands of collector car enthusiasts who are buying and selling exceptional vehicles, restoration parts and supplies and those unique items found only at this event.”

“I selected this beautiful Pontiac Grand Prix because of the near-perfect panel alignment, bodywork and Paint application – all done to a very high standard,” Oja noted.  “It featured excellent base coat application in the correct color and outstanding color sand and polish.”

“The paint on this car was beautiful,” said Oja.  “All bodywork, paint and assembly was performed by the owner, who is a truck driver! It was done to a very high standard and driven regularly!”