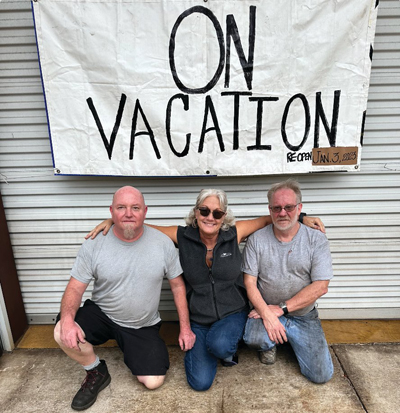 The sign outside Emmitt’s Auto Repair on U.S. Highway 17 in Green Cove Springs, FL, told motorists the shop was on vacation. The iconic automobile repair shop specializing in brakes, steering and suspension was set to reopen Jan. 3.

But for the first time in 50 years---22 of them north of city limits---it will be in the hands of a new owner.

During a more than half-century run in Duval and Clay counties, Emmitt’s saw a blessed time of business and family-friendly service to customers at the shop, with the Rigsby family establishing a business model like no other during their time in North Florida.

With Teresa Rigsby heading into retirement, she decided to turn the business over to somebody else. Leaving a legacy that took generations to build, however, won’t be easy.

Following the passing of her husband, Matthew Rigsby, Teresa not only had to run the store’s finances, but she was thrust into a general manager’s role as well.

She now will wade through a day-by-day healing process while continuing to spend valuable time with her grandchildren.

“One day at a time, and my grandkids,” she said.

It will be up to the new owner to maintain a standard that took decades to build.

The reputation that founder Emmitt Rigsby, who then passed the torch to his son, Matthew, established was that of hard work, toughness and a belief in getting the job done at all costs.

When mechanic Matthew died on Aug. 3, 2020, the county not only lost a great mechanic but a larger-than-life figure in the community whose memory will forever be remembered.

He served as the lifeblood of the auto repair shop; his personality shone through at all moments. He was good at fixing a vehicle, and regardless of the circumstances, he always was honest about the status of their ride---all while finding a way to allow his plain-cut and brutally honest personality to shine through.

“It was his way, or no way,” Teresa said laughingly.

Hundreds of residents have walked inside the doors of the auto shop. One of the longtime customers has been the Clay County Sheriff’s Office, which gets all of its regularly-scheduled alignments completed there.

Customers came from all over Florida and out of state, Teresa said. Emmitt drew such a cult following, one resident who moved to Louisiana would make the trip back to have his car serviced at Emmitt’s.

“Matt was very knowledgeable. He knew everything going on in that shop. He touched every vehicle and made sure it was right when it went out of the driveway,” she said. “(The community) believed in him.”

Residents have trusted in Rigsby’s auto advice, but it was a phenomenon that went much deeper than having a clean set of wheels on the road.

“My husband was tough, and he ran a tight ship. But everyone came to him for advice, and everything that he said was like liquid gold," Teresa said. "Customers would just come and pour out their hearts to him, and he would take the time to talk to them. They would come to him for everything, even family issues. They appreciated his boldness. They knew where he stood, and they liked it."

New ownership will have the benefit of keeping two of Emmitt’s top mechanics. Lead technician Rick Santillo and mechanic John Holmes will be retained as the company moves into a new era of providing fast, friendly and loyal customer service. Between the two, they have worked for more than 37 years at Emmitt’s.

Teresa said one of the conditions of the sale was each of her full-time employees would be retained.