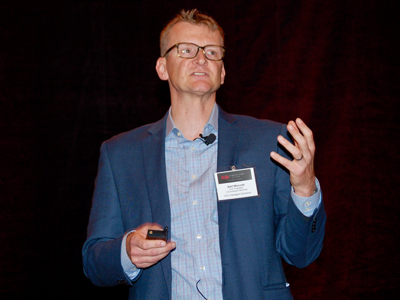 One trend not expected to end in 2023: the rapid rise in average repair costs.

That was among the messages Bart Mazurek of CCC Intelligent Solutions shared during the MSO Symposium in November in Las Vegas.

He cited among the causes the rise in the average number of parts being replaced per repair job.

“In just a two-year span, we’ve gone from 10.5 parts to almost 12.5 parts,” he said. “And those two additional parts are driving four additional hours of labor.”

He noted a bumper for a 1996 Honda Accord consisted of about 11 components, but the current model Accord bumper includes more than 20. More of those parts, such as ADAS sensors, are not repairable and are available only through the automakers.

He said the OEM share of average parts costs had been “rather steady for years,” but in 2022, it “really jumped up because the OEMs are the only ones that can supply those additional two parts per job.”

CCC’s data seems to indicate the increase in the average repair order isn’t being dramatically impacted by a significant increase in shop labor rates.

“Labor rates have only gone up $1 this year compared to last year,” Mazurek said, noting he was speaking only of work processed through insurer direct repair programs (DRPs). “It’s continuing to rise, but it’s a slow process.”

He shared a graph indicating the growth in the national average labor rate has lagged below the consumer price index (CPI) for “motor vehicle maintenance and repair in U.S. cities” since late 2018, but the difference has become increasingly stark in 2022, with that CPI growth far outpacing increases in labor rates.

The slow growth in DRP labor rates could be contributing to another trend Mazurek reported: Shops have fewer DRP agreements on average than they have in the past. Across all business models---single-location, dealership and MSOs---shops averaged 4.6 DRPs in 2022, according to CCC data, down from an average of 5.2 in 2021, more than an 11% decline.

Breaking it down by shop type, dealership collision shops fell from 6.3 DRPs to 5.8; regional MSOs fell more than 6% to an average of 5.6 per shop; and independent shops dropped from 3.1 to 2.8 DRPs on average---more than a 9% decline.

“I think that has to do with repair facilities reevaluating DRPs based on the current market and their goals,” Mazurek said. “And they decided to reduce the number of DRP programs to better align with their goals.”

Continued Decline in ‘Hours Per Day’