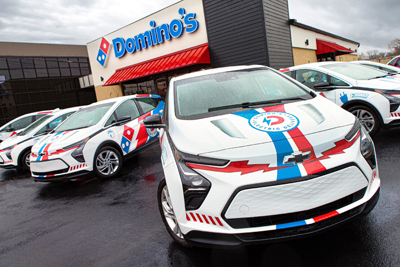 Domino’s Pizza is rolling out a fleet of 800 Chevrolet Bolt EVs for sustainable pizza deliveries.

More than 100 custom-branded Domino’s Chevy Bolt EVs will begin delivering pizzas in November throughout the U.S., the company said. In addition, 700 more units are being prepared and will be added to the fleet in the coming months. It will be the U.S.’s largest electric pizza delivery fleet.

Domino’s has been delivering pizzas for 62 years, with the first vehicle ever used being a Volkswagen Beetle. After testing autonomous vehicles for deliveries in 2015, which is still under development, Domino’s is pushing to “lead the charge in the future of pizza delivery,” CEO Russel Weiner said.

“Domino’s has always been on the cutting edge of pizza delivery and electric delivery cars make sense as vehicle technology continues to evolve,” he added. “We’ve made a commitment to net-zero carbon emissions by 2050, and this is one way we can begin reducing our environmental impact, one delivery at a time.”

Domino’s primary motivation for switching to a partial EV fleet is maintenance and fuel costs. The company said EVs will provide zero emissions while also keeping drivers safer due to ADAS features. However, keeping maintenance costs low and keeping deliveries moving “without the financial impact of high gas prices” is explicitly mentioned in the company’s release.

“We’re excited that Domino’s has chosen the Chevrolet Bolt EV to build their electric pizza delivery fleet in the U.S.," said General Motors VP of GM Fleet Ed Peper. "Both companies are committed to bettering our environment. GM plans to eliminate tailpipe emissions from new U.S. light-duty vehicles by 2035. With an affordable price, fun driving characteristics and a 259-mile range, the Chevy Bolt EV is the future of Domino’s electrified deliveries.”