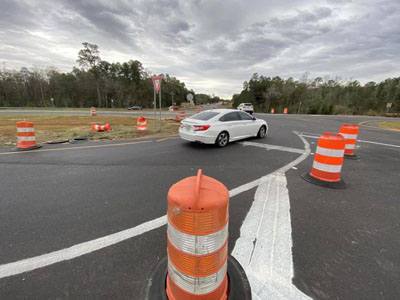 The 33 projects are funded by the Alabama Transportation Rehabilitation and Improvement Program-II, a program created by the Rebuild Alabama Act.

"I am proud to announce the largest round of local funding since the passage of the Rebuild Alabama Act as I close out my first term and gear up to begin the next four years," Ivey said in a news release. "Our decision to address Alabama's infrastructure challenges is paying major dividends in several vital areas, and I am thrilled to continue building on this momentum by moving forward this year's projects."

According to a news release, the state has awarded $140 million in highway funds since the Rebuild Alabama Act was signed into law by Ivey in 2019. This act increased the state's gasoline tax by 10 cents to 28 cents per gallon. The state's gas tax will also be indexed to the National Highway Construction Cost Index starting in July and can increase by up to 1 cent per gallon every other year.

The 33 projects were selected by a committee created by the Rebuild Alabama Act and must be started within two years of the award of funding. Eighteen of the approved projects will have $7 million in matching funds from cities or counties, which isn't required under the law.