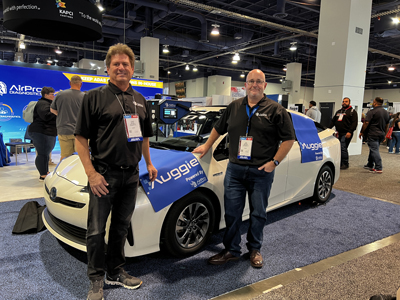 “The Self-Guided Auggie DTS takes the place of having to do all of the setup with physical targets,” explained Lonnie Margol, CEO of AirPro Diagnostics. “The new release is basically the same device, but users can now control Auggie on their own and use any ADAS calibration capable scan tool.”

The previous version of the device required shops to use an AirPro Diagnostics scan tool and remote technicians. The updated version allows the device to be operated by the user and will work with any ADAS-capable scan tool and a free smartphone interface. All setup specifications and instructions are displayed on the Auggie, allowing users complete control of their static FFC calibrations.

“The calibration game has now changed,” said Josh McFarlin, executive vice president of AirPro Diagnostics. “We listened to our customers and now they can use their own scan tool, fully independent of AirPro, to perform FFC calibrations.”

With ADAS FFC calibrations becoming increasingly more complex over the last decade, McFarlin said the Auggie can save technicians time, increase efficiency in the shop and help perform a safe repair.

“It takes all of the environmental conditions out of the equation,” he said. “Shops don’t need a 30-by-60[-foot] footprint, controlled lighting and other complex requirements.”

Margol said the Auggie also enables body shops to keep calibrations in-house rather than having to sublet the work.

“The worst thing is to send a vehicle out and then you’ve lost control of the process,” he noted.

“It’s remarkable to me how many collision repair shops aren’t doing calibrations when the OEMs now require them after any structural repairs,” said McFarlin. "They are either sending it to a dealer, or worse, they aren’t doing it.”

By not doing a calibration in-house, McFarlin said shops are losing control of their cycle time and the associated revenue.

The company provides step-by-step directions to operate the Auggie and a help button connects to AirPro brand specialists for immediate support.

About four years ago, AirPro envisioned developing a solution for static calibrations.

“The manual method seemed so archaic,” said Margol. “Not a shop in the world is built with a level floor and has non-reflective paint on it.”

As a result, they set out to look for a better solution. A calibration bay was built at one of their customer’s collision repair shops and the team began experimenting with how to best digitize the targets.

When the Auggie was invented, the main goal was to ensure it was mobile so calibrations could be performed virtually anywhere. Margol said this was especially helpful for the glass industry to be able to calibrate vehicles in the field.

Since then, the tool has evolved to meet the needs of the industry. There have been multiple updates and two impactful releases of the software. “It’s such a thrill that this project has really come to life,” said Margol.

“A lot of shops already have a solution for a diagnostic tool and weren’t looking to make a change,” said McFarlin. “The Auggie is now an option for them.”