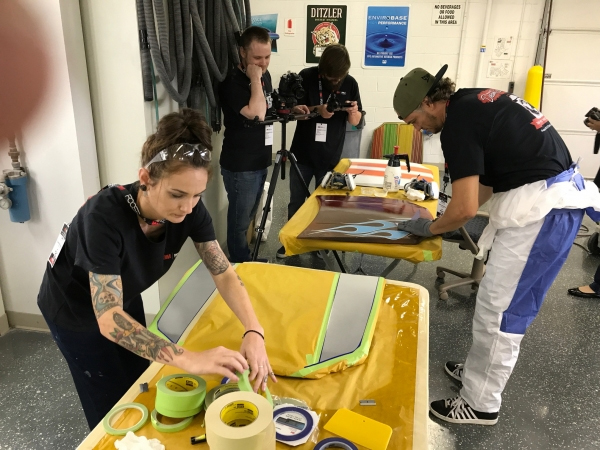 Connie Manjavinos, 25, started her career as a detailer at a CarMax in her hometown of Virginia Beach, VA, seven years ago.

Recently, she was honored as one of the world's top painters at the 3M Automotive Aftermarket PPS World Cup in Detroit, MI. It has been an unexpected and wonderful journey for Manjavinos as she pursues her dreams while providing a support network for female painters worldwide and gaining national attention for her work.

Right out of high school, Manjavinos wanted to become a police officer, but she knew that in the interim, she would need to get what she called a "big girl job". After exhibiting her ability to learn quickly along with a knack for painting, Manjavinos seized an opportunity to transfer to another CarMax location in Colorado, where they were seemingly willing to make her a full-fledged painter.

"I transferred out there to be a detailer, but with the idea that I would become a painter there," she said. "After that first week I started going over to the paint department to learn as much as I possibly could. At that point, they really hadn't figured out a role for me, so I was getting paid as a detailer, but I was in the paint department for 6--8 months. I learned everything from masking, unmasking, how to buff fresh paint, primer, bodywork, PDR---and then into the booth. I became an unofficial part of their paint crew, but I was just waiting for a job. So, when the position as a painter finally opened up, I got it, because I was already doing it all anyway. After a while, I became the paint manager there."

With original plans of attending school to study Administration of Justice and riding along with the local police department, Manjavinos then decided to pursue a new direction toward collision repair---and she's happy that she did.

"I saw that I could do this, so I decided to step up and give it a real try," she said. "It makes me happy when people see my work and say, “Wow, a girl did that.’ I am only 5" 2' and I weigh a little more than 100 lbs., but when people see me banging out these cars, they are kind of surprised, and I love that!"

After leaving her job at CarMax, Manjavinos landed a job at a vehicle restoration shop called Emmel's Enamels in Denver, CO, where she was allowed to learn how to paint cars the right way, she said.

"I had to commute a couple hours every day and I definitely took a financial hit to work there, but I wanted to learn from these people, and I did. After eight months there, I decided that I was ready to jump into collision repair,” she said.

So, she got another job at a body shop in the area, but things did not go as well as planned, Manjavinos said.

"I was learning under a guy who had no desire to teach me, so it was definitely very frustrating,” she said. “But, I kept plugging away and after about eight months I could see that there was no chance of becoming the number one painter there, even though the head painter was retiring and they had promised me the position. When I asked them directly if I was going to eventually move up, they said no. One of the guys told me that he would never let his daughter become a painter, so I bailed and went back to work at Emmel's Enamels for a short time."

Recently, Connie made another move from Colorado to Florida to work for Kiddy's Classics Automotive Repair in Jensen Beach, FL.

"It's a great opportunity, and I am so excited," she said. "I get to do everything here, [including] shadowing the owner who specializes in metal fabrication. I've learned a lot about heavy bodywork and restoration paint jobs here. They have a new painter there, and I have trained her to be my helper and become a painter so we can tag-team projects later. She is so happy to be learning, and I am delighted to help her after all of the things I had to go through."

To network with women who are either painters or work in some capacity within the collision repair industry, Manjavinos created an online group called "Girls Behind the Gun."

"I could see that the guys were getting major recognition for their work, but the women were not,” she said. “After a while, I started thinking, ‘Am I the only one out there?’ When I started the group on Facebook and Instagram back in February of 2015, the ladies started flocking to it, and now we have 16,500 followers. It's a place where women who work in this industry in any capacity can communicate, interact and share ideas."

As Manjavinos connects with more and more female painters all over the world through her efforts on social media, her mission is quickly gaining momentum.

"Painting is our shared obsession, and now we're communicating back and forth on a daily basis," she said. "It's become something that we can hopefully build upon because we all need friends in this business."

Manjavinos has bigger and better plans for "Girls Behind the Gun" and looks forward to meeting new female painters at SEMA and other networking events this year.

"Now I am reaching out to young women who are going to be the future refinishers of this industry; to encourage them and mentor them," she said. "We need to work together and create a community where we can share information and set ourselves up for success. If young girls can find this career early in their lives, they can achieve so many things and even though they might encounter setbacks, we've got their backs. I want to focus on the future of ‘Girls Behind the Gun’ now to inspire them."

With a long career ahead of her, Manjavinos is ready for whatever happens next, she said.

"I want to learn it all and play a role in this industry as it changes,” Manjavinos said. "That's why I am trying to inspire women and help them as they take it to the next level. Right now, I am learning everything I possibly can to find out what I am really good at, and that includes metal work and every aspect of fixing or restoring a car. My passion for this business runs deep, and that's why I love what I do every day!"