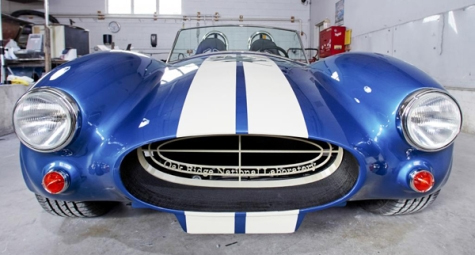 Rick Spears, owner of Malibu Collision in Knoxville, TN, has always been interested in new technologies. As a result, he strived to incorporate state-of-the-art equipment and automotive materials in his collision repair facilities over the years.

Eventually, he opened TRU-DESIGN, a 3D printing company adjacent to his body shop. The company has worked on a wide range of projects, including a full-size, drivable Shelby Cobra, and produces proprietary additive manufacturing (3D-printed) coatings.

“3D printing is going to change everything in the future, including the body shop industry,” said Spears. “It’s really exciting to be part of this growing field that is taking off like a rocket.”

Born in Texas and raised in Florida, Spears became involved in the body shop business in 1975. He was attending school in Florida in the 1970s and received a scholarship in commercial art.

“I was dating a lady whose dad owned two Ford dealerships and I began painting for his business while attending college,” Spears recalled. “I quickly found that artistry paint doesn’t act the same as automotive paint.”

Hoping to work as an artist at Walt Disney World, he realized he could earn more painting cars than working as an artist. He worked his way up from a painter’s helper and sweeping floors to becoming a driver, then a manager, and later opened two collision repair facilities in Florida.

After moving to Tennessee, Spears opened Malibu Collision Center in 1999.

The company’s mission is to provide the most accurate and quality collision repairs possible. It specializes in using advanced technology on all customer vehicles for major collision repairs, restorations and custom work. This includes working on high-end, luxury, vintage, custom and specialty vehicles.

“We believe that materials such as carbon fiber, composites, fiberglass, aluminum and other advanced materials are the future of the automotive repair industry,” he said. The business prides itself on providing exceptional customer service and ensuring customers are kept informed throughout the repair process. The shop also takes steps to address the facility’s waste by using an advanced product, the Becca Recycling System.

“As one of the first non-hazardous waste-producing collision repair facilities in East Tennessee, we recycle everything, including Styrofoam packaging,” said Spears.

The goal is to provide employees and customers with a clean, safe and pleasant environment.

For many years, Malibu Collision also concentrated on custom work and restoration projects. Although Spears was passionate about the jobs, he realized it was hard to earn money this way.

Malibu Collision’s work with carbon fiber and composite parts has been featured on the DIY and SPEED channels as well as at NOPI shows.

The shop has received numerous awards, including “Best of Knoxville” two years in a row. In addition, it is a three-time recipient of both the Ford Medallion Manager Award and Ford Top Gun Award, as well as Top 10% of GM Shops Award.

The company’s first attempt at 3D printing a car was in 2008.

“The power went off, we ran out of materials, and had software and hardware problems printing something so big,” recalled Spears.

Although he said the car turned out ugly, he saved it as a reminder of the experience. The Shelby Cobra contains 500 pounds of 3D-printed products, 20% of which is carbon fiber reinforced ABS material.

The following year, the body shop was involved in a custom project with Mickey Harris, the Ford Motor Company and Phantasmic Entertainment Inc. The project entailed creating a Ford F-150 crew cab truck to honor the men and women of the U.S. armed forces. It was unveiled at the 2009 SEMA Show and received Motor Trend’s “2009 Truck of the Year.”

Since opening TRU-DESIGN in 2010, Spears and his team have worked on a wide range of projects with the Department of Energy, the Department of Defense, the construction industry and the automotive and insurance industries. In addition to printing car parts such as fenders and hoods, TRU-DESIGN’s projects include a submarine for the Navy, air intake manifolds for F-16s and a house.

In 2014, Spears attended a tradeshow in Washington, D.C., to learn more about the use of carbon fiber. He met representatives from Oak Ridge National Laboratory (ORNL), which happened to be based in his home state of Tennessee. They were looking for someone to make carbon fiber parts for the lab’s Manufacturing Demonstration Facility (MDF), which includes a 3D printing department.

After the event, Spears met with ORNL and began making carbon fiber parts for the lab.

That same year, he partnered with the lab to print a 1965 Shelby Cobra replica for the Detroit Auto Show. The goal was to complete the vehicle in six weeks with parts printed in 24 hours. “From CAD drawing to drivable car, the project was unheard of,” he said. The vehicle contains 500 pounds of 3D-printed products, 20% of which is carbon fiber reinforced ABS material. The 3D-printed parts include the shell, support frame, passenger monocoque, grille and headrest brackets.

“The Shelby Cobra replica demonstrates the power of modern additive manufacturing, rapid prototyping technology and 3D printing,” said Spears. “It isn’t just proof that there’s more than one way to make a car---it’s the future of improving manufacturing solutions in the automotive industry.”

Spears said it is a great example of a full-scale, fully functional “rolling laboratory.”

“Using this technology, car designers can test and enhance automotive technologies in real-time,” he explained. “With the ability to quickly print a working vehicle, manufacturers will begin to innovate at rapid rates.”

“I realized that’s my business,” he said. “I’ve been doing coatings all of my life on cars and I thought who could make it better than someone who has used it all his life.”

TRU-DESIGN also produces tools for manufacturing and specializes in creating molds using the latest advancements in composites and additive manufacturing.

“Our innovative practices and creative ideas are some of the company’s greatest strengths,” said Spears. “The unique partnership with Oak Ridge National Laboratory enables us to stay on the cutting-edge of automotive technology, research and new materials.”

Spears said large format additive manufacturing has advanced in equipment and materials in a short period.

“This has led to the adoption by industries as a viable manufacturing alternative or enhancement to traditional processes,” he said.

Spears said there are numerous benefits to 3D printing. Not only are complex geometries now possible, but products can also move from design to market in weeks, rather than months or years. Design feasibility can also be confirmed prior to production, less storage is typically required and there is more material flexibility.

Watch a video of the making of the 3D Printed Shelby Cobra: