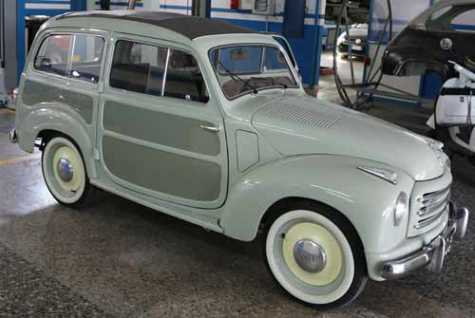 In the land of four-foot pizzas, pasta cooked al dente each and every time and breathtaking scenery everywhere you look, Autocarroseria La Pigna in Longobardi, Italy, is a second-generation shop with five employees that recently celebrated its 52nd anniversary.

While I was on vacation in Italy this summer, I decided to interview a shop owner to get a glimpse of the collision repair industry there and to, hopefully, deduct some of my trip on my taxes.

When my cousin and tour guide, Frank Aloe started asking around for the best shop in town for an interview, most mentioned Autocarroseria La Pigna. Who needs Yelp? I thought. The old word-of-mouth has been the best way to rate any business for centuries; so, when I walked into this immaculate shop, I was fairly confident that it would be one of the area’s best collision repairers.

My cousin speaks fluent Italian, so I had a good interpreter for the interview. In addition, he knows nearly everyone in my family’s hometown of Longobardi, in the Calabria region of Italy (pop. 2,200). During the one-hour interview, I realized I wasn’t getting a full translation from my cousin every time. Whenever I asked La Pigna’s Owner, Raia Maurizio, a question about topics such as DRPs, OE vs. aftermarket parts, etc., his responses were rather lengthy. But, each time my cousin would offer me a one-sentence answer. I knew this wasn’t going to be easy and thought I should have tried a little harder to learn some Italian before embarking on this trip.

Maurizio’s father, Rocco, purchased La Pigna in 1989 until he stepped aside and gave the reins to his son a few years back. His dad passed away earlier this year at the age of 75, but he taught Raia the right way to fix cars without cutting corners. Today, Maurizio’s wife, Luisa, runs the front office to accommodate the shop’s growing clientele. Three years ago, he doubled the size of his facility when he acquired the mechanical shop next door, so he needs a steady flow of work to pay the bills, he said.

When he was ten years old, Maurizio began prepping and polishing Fiats when school was out, and after a while, the crew taught him how to do basic metalwork. His strength during those years was rust repair, but eventually, he was permitted to do it all, including paintwork.

I was trying to find some statistics about how many accidents take place in Italy. One of the things I noticed immediately was that these people drive fast but in control. Their ability to pass each other on tight roads is pretty amazing, and I flinched more than a few times as my cousin’s rattling old Volkswagon Golf flew around blind turns in the middle of the night.

In a land where there are more scooters than cars, the crew of five at La Pigna works on scooters and motorcycles and also does restoration work to complement the 30-40 collision jobs they perform every month. The two-wheel repairs are mostly cosmetic, and the car re-building business is limited to three to five vehicles annually, but they do fill in the gaps when business slows down.

If there are any discrepancies between estimates, the tug-of-war begins and “we battle it out,” Maurizio said. “Sometimes they do not accept our labor rate, which is 35 euros plus tax, so that is where we will often disagree.”

When it comes to parts, Maurizio gives each of his customers three options—OE, used or aftermarket. “We are well known here in southern Italy for having access to good parts, which is important when we are working on Maserati’s, Ferraris and Lamborghinis.

We can get factory parts in three to four days; aftermarket parts next day and if we need a part fast, we can go to the wrecking yard in Cozensa and do it that way. Before we ever install any part in any car, we make sure that the customer knows and agrees.”

One thing that Italy is very strict about is modifying any vehicle even slightly and that’s something Maurizio has to keep in mind, especially when he is restoring an old classic car. “We have to get documentation from the owner before we touch it,” he said. “If you get caught driving a vehicle that was modified without approval, there’s a serious fine and they can take the car from you too.”

Maurizio believes he will succeed as long as he follows his father's advice. “He told me don’t compromise the work and always do the right things for our customers and workers,” he said.

He explained that if he can continue to repair cars correctly and maintain his reputation for being a good shop, everything else will fall into place. In Italy, they say, “Mangia bene, ridi spesso, ama molto” which means “Eat well, laugh often, love much … and repair cars using OE procedures.”