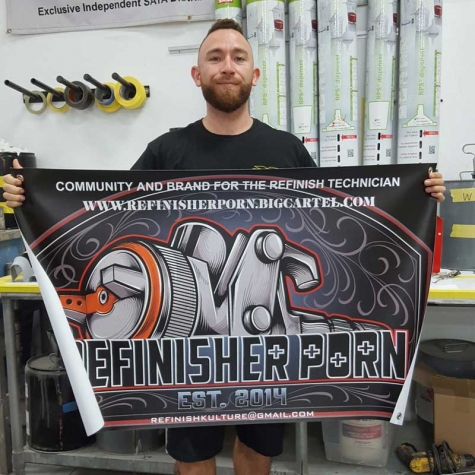 Many painters are content when they’re able to get their work done on time while keeping the quality high, but that’s just the beginning for Miguel Perez, head painter and manager at Extreme Paint Shop, a division of Extreme Performance in South Florida.

While running a paint crew and working on some of the world’s most unique and expensive vehicles, Perez has created a large following of painters, metal shapers/fabricators and other collision repair and automotive restoration professionals worldwide with podcasts, merchandising and videos.

His brand is Refinisher Porn---@refinisherporn on Instagram---and his merchandising company is Refinish Kulture---@refinishkulture---and currently more than 100,000 followers have joined the network.

Perez, 34, began his career in paint/restoration as a teenager, where he was exposed to working on cars and boats.

“My dad retired from the Coast Guard and he started a boat restoration business called Marine Perfection,” he said. “I was working there after school and I learned a lot. Restoring boats helped me with my abilities, but working on cars was where I wanted to be.”

“My brother’s 1989 BMW blew up, so I took it to school and we worked on it there. We thought that we were doing an awesome job, but when I look at that project now, I have to laugh. It shows how far I’ve come and how much I’ve improved my skills and processes over the years.”

After graduating from high school, Perez took a year off to regroup and figure out his next move. Then he enrolled at WyoTech, majoring in collision refinishing with a minor in metal fabrication. It was a good experience where he learned more, but he also realized school is only a platform and not just a ticket to employment.

“Some people graduate from WyoTech and think they’re going to enter the industry as a tech or a painter,” Perez said. “But the reality is that they’re going to start at an entry level and it might take five to 10 years to get to where you think you want to be. I tell people that school gives you the basics and builds a foundation, but it’s only the beginning.” When he’s not in a paint booth or doing metal work, Perez shares ideas, photos and short videos with a huge network he created six years ago on @RefinisherPorn.

Perez is a busy man, as the head of the paint department at Extreme Performance, a huge operation in Palm City, FL, that employs more than 30 people in several buildings equaling in excess of 66,000 square feet.

Extreme Performance is known as one of the top custom shops in the U.S., and if you’ve ever attended a SEMA show, you’ve seen more than a few of their game changing creations.

Perez was on teams that played roles in restoring vehicles for Michael Jordan, Vanilla Ice and actor/comic/podcaster Joe Rogan, who inspired Perez to eventually produce a series of podcasts himself.

But despite all of the work this busy shop generates, Perez still finds time to manage his popular Instagram account while creating mega-cool T-shirts, hoodies and other products emblazoned with his Refinish Kulture logo, available at www.refinisherporn.bigcartel.com. To interact with his Instagram followers, many of whom are considered top-tier painters and metal fabricators, Perez throws an epic bash at SEMA. It didn’t happen last year, obviously, and no one really knows what the show will look like this year, but people are still talking about the party he threw in 2019.

“We do it at a different restaurant every year, and more and more people show up each time,” he said. “We don’t talk about paint enzymes or color matching at the party. We just hang out and get to know each other away from the show, and meeting new members in person is always great!”

Perez is like the Bo Jackson of custom paint and body work because he can easily cross over from paint to metal and back, if needed.

“I have always been attracted to fabricating and doing metal work, and that’s why I’ve always pursued it and worked to get better. Some painters are happy in the booth, but I have always wanted to play a larger role. I always tell people, especially if they’re new to the industry, be open to new things and don’t be afraid to develop new skills, because that way you will be more appreciated and more sought after.”

Perez gives his followers a simple message---never stop learning and don’t be afraid to make mistakes along the way.

“I got better because I had good teachers and a lot of my mistakes led to valuable lessons. New techniques, better processes, little tricks---always be working to improve and you’ll benefit in many ways down the road."

Perez is delighted with what he’s done on Instagram with @RefinisherPorn.

“My initial goal was to turn @RefinisherPorn into a network where people would come together, showcase each other’s work, and get better as a result,” he said. “I never imagined that this would turn into what it is today and I’m excited about where it’s headed.”

Wherever it’s headed, you know Perez will be there to help other refinishers, metal fabricators, car rebuilders and collision repairers from Los Angeles to NYC and everywhere in between.