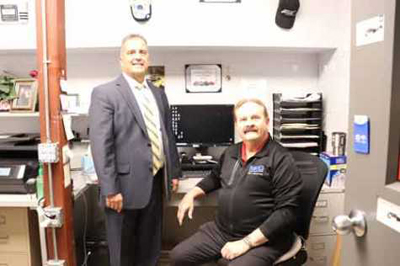 In 1970, Rick Stewart was a recent high school graduate who took a job as a parts delivery driver for a local Ford dealership, thinking it was a temporary gig.

Instead, Stewart climbed the ranks and now, five decades later, he is the parts director for Commonwealth Dodge in Louisville, KY, just now contemplating leaving the parts department---if his boss will let him.

“He can’t retire, because he can’t be replaced,” said Howard Kearschner, general manager of Commonwealth Dodge.

Since Stewart was named the dealership’s parts director in January 1983, he built it up from a two-employee operation with $40,000 in inventory to one boasting 22 employees and $1 million in inventory.

That growth was largely spurred by Stewart’s idea to expand the dealership’s parts inventory to enable it to sell wholesale to local collision repair shops.

Stewart said he worked with wholesale customers in his previous job before joining Commonwealth, and knew he had the experience and contacts to make it work.

“They really believed in me,” Stewart said of the dealership’s management team. “They trusted me, and helped me increase the inventory. They knew I was enthusiastic and had the contacts.”

That trust turned out to be well-placed; the dealership’s parts department is now the largest supplier of ;Mopar parts in the tri-state area, and No. 17 in the U.S.

“It was Rick’s idea; he took the ball and ran,” Kearschner said.

Stewart said the key is building relationships with body shop owners, who have the same goal he does---to take care of customers.

“Our (dealership’s) slogan some years back was ‘We put ourselves in your shoes,’” Stewart said.

Stewart said his favorite part of his career is the people he has met and worked with over the years.

He also reflected on how technology has changed the way he does his job.

“We went from looking up parts in big heavy books on the counter to online catalogs,” Stewart said.

“We used to have to hand write and bill out every parts invoice,” he said. “For a collision repair, you could have 12 to 15 parts, all with numbers, price, information, customer information, and it had to be quick and legible. Now everything is done on the computer.

“It’s been an amazing change to see over the years,” Stewart said. “Young people who work here can’t imagine how we could do that.

Speaking of young people, Stewart said he would like to see more consider a career like his, that does not require a college degree to get started.

“A little enthusiasm and hard work will get you places,” Stewart said. “It blessed me with a great career and good financial standing.

“College is great, but it’s not for everybody,” he said.

After more than 37 years as parts director at Commonwealth, retirement is on Stewart’s horizon.

Though he does not have a date in mind, Stewart is already leaning toward continuing to “hang around” part time---"if they need that”---pulling parts or driving a delivery truck again.

But he’s also looking forward to spending more time on a golf course and traveling with his wife to visit their four children and 10 grandchildren, some of whom live in Colorado and Utah.

“I’ve put in the hard work,” Stewart said. “I’m fortunate to be able to take some trips and see parts of this country.”

Kearschner said whenever that day comes, Stewart will be sorely missed.

“His department runs like it’s on auto pilot,” Kearschner said. “But he’s an even better person than he is an employee.

“And he’s a good golfer,” Kearschner added with a laugh.