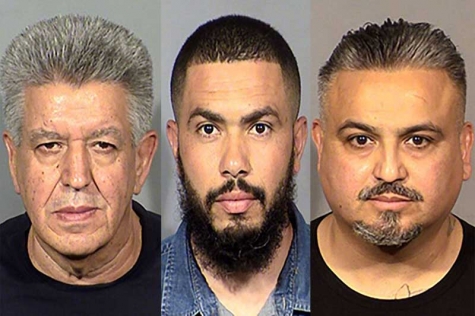 Yousef Hammoudeh, 61, Suleiman Showbaki, 36, and Eric Brambila, 46, were arrested in mid-March in connection with a scam involving the five cars, including two “high-end exotic vehicles,” which combined are worth more than $328,000, according to a news release from the department.

Showbaki is the owner of S & M Auto Body, a paint and car repair business in the northeast Las Vegas Valley, the department said. Brambila is the owner of Sharp Transmissions, a repair shop in North Las Vegas.

Investigators believe Showbaki and Brambila falsified work orders for repairs, and then sold the five vehicles to Hammoudeh “for profit,” the release said.

Lien sales for the vehicle were then completed using the fraudulent repair orders, “even though work was never done” on the cars, the department said. The DMV then received “falsified title requests” for Hammoudeh to obtain legal ownership of the vehicles.

“Falsifying title documents and fraudulently obtaining ownership of a vehicle through a lien sale is the same as stealing it,” J.D. Decker, the chief of the DMV compliance enforcement division, said in the release.

Licensed body shops and garages conducting lien sales can auction a vehicle when the owner fails to pay for the car’s repairs, the department said. The business conducting the auction “must follow strict procedures and must sell the vehicle to a third party.”

When arresting Hammoudeh, officials impounded three other vehicles owned by Hammoudeh and his family in Nevada. The vehicles had California dealer license plates that Hammoudeh obtained through a dealership he owns in California, the release said.

Hammoudeh was charged with...

The men were arrested March 17 and March 18, but then released on their own recognizance, court records show. Hammoudeh is scheduled to appear in court April 20, while Showbaki and Brambila are due to appear April 19.

We thank the Las Vegas Review-Journal for reprint permission.