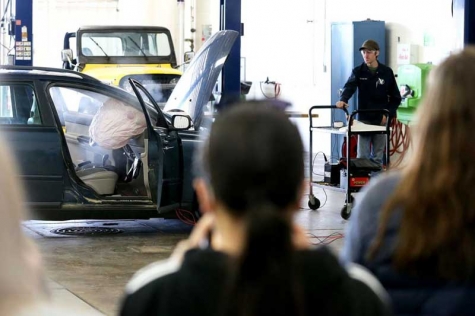 ...understanding about the potential of a career in collision repair across the industry as a whole has contributed to the kind of low enrollment numbers LCCC pointed to as a big reason for the closure. The college also cited influence from the insurance industry keeping starting wages low for collision repair technicians compared to mechanics.

Robinette said there is truth to that, but it’s a shortsighted view.

“Mechanics are going to make a few more bucks initially,” he said. “It depends on a couple of factors, but I would submit that within a couple of years they’re at least equal. And most likely, the collision person is making more during the same 40-hour work week.”

Robby Bartlett, body shop manager for Spradley Barr Motors in Cheyenne, WY, said he’s hired more than 10 graduates of LCCC’s soon-to-be deactivated program over the last five years. Some of his early career employees are making between $50,000 and $60,000 per year; one of his more experienced repair technicians is bringing home closer to $80,000 annually.

The program at LCCC, which he often partnered with to hire apprentices and later full-time staff, was a pipeline for his business. After the program closes, the privately operated Laramie-based WyoTech will be the only school near Cheyenne to offer formal collision repair training---and it is far more expensive than the program at LCCC.

“We already struggle with a lack of technicians. Having that program shut down now means there’s one less avenue to turn to for new employees,” said Bartlett, who has served on LCCC’s auto body advisory committee. “It was nice to see a Wyoming-based school drawing Wyoming-based students that were looking to stay in the area and our state. We already struggle with that.”

Retention of Wyoming’s skilled workforce across many different industries is a challenge Gov. Gordon has highlighted numerous times during his tenure, most recently during his State of the State address in February.

“We should be thinking about...