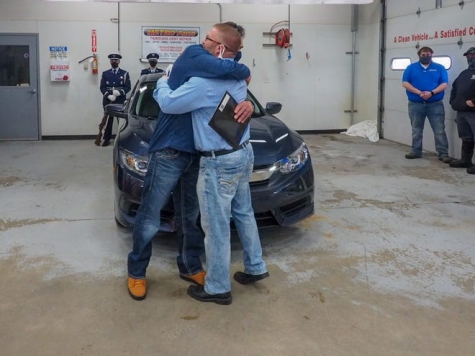 Jeramy Myers of Flawless Auto Body Shop held back emotion as he presented a free car to a local veteran in need Feb. 16.

“When we talked about this, about a year and a half ago… it was just a dream,” Myers said. “And now, today's the day.”

U.S. Army and Navy veteran Benjamin Fontana, 45, beamed when he was presented with a navy 2016 Honda Civic in the shop garage. Fontana served for 10 years, first enlisting at 17 years old in the shadow of his grandfather’s service in World War II.

Originally from Pittsburgh, Fontana has two daughters in their 20s living in Minnesota.

Fontana said it was a lot to take in but that he “absolutely” liked his new wheels and described the opportunity as an amazing honor.

“What’s not to like?” Fontana said, looking inside the vehicle’s black interior.

Fontana spoke to the crowd and expressed his gratitude to everyone who participated in the event, including the Malmstrom Air Force Color Guard and the C.M. Russell High School Chanteur Choir, as well as all the businesses who donated funds that went toward restoring the car.

“The benefits to bridging that gap between the community in which we live and the veteran community is… That's a powerful thing,” Fontana said.

Several local businesses contributed, with First Interstate Bank sponsoring his first year of liability insurance and Schulte's 38th Street Store donating his first tank of gas along with a gift card, among many others.

Jeanne Myers, wife to Jeramy and marketing director at Flawless, said they worked with the National Auto Body Council’s Recycled Rides program to acquire the car their team worked on from Allstate Insurance. She said the local chapter of...