It Turns Out Washington Residents Can’t Drive in the Snow 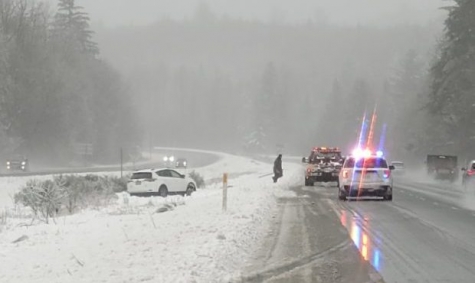 A one-car spinout on Eastbound I-90, related to driving too fast for conditions. Photo courtesy of Trooper Rick Johnson/Twitter
Share This:

A KIRO Radio listener texted me last week as we were trying to predict the snow, and he told me he couldn’t wait for it.

He works in an auto body shop, and he knows snow equals dollars for his business. He’s probably full of fender benders right now.

State Trooper Rick Johnson points to speed and over-confidence in all-wheel-drive vehicles as the main problems in most of the crashes.

“People that have these all-wheel-drive vehicles, they think they’re invincible,” he said. “You can get going, but ice doesn’t care if you have 42-wheel-drive.”

There were so many crashes on I-90 on Feb. 15, the state had to close Snoqualmie Pass overnight. It was still closed as of Feb. 16, from the truck stop in North Bend to Ellensburg, because of the avalanche danger.

The state was going to reassess the danger in Snoqualmie Pass, but up to another 15 inches of snow was expected across the pass by later that night.

We thank MyNorthwest for reprint permission.