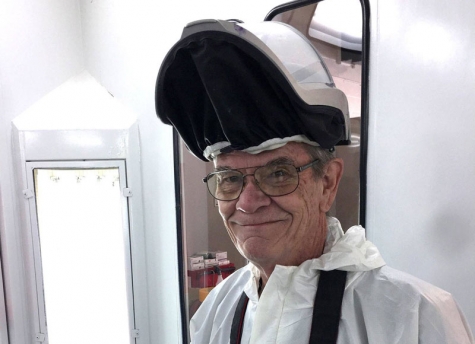 Dick DeLoach was a humble man. Fifteen years ago, he called me to inquire about writing for Parts & People, a now defunct automotive publication out of Denver. I asked him if he had any experience and his response was “A little.”

But, when he sent me his portfolio, I could clearly see he was underplaying big-time his long and impressive career as an automotive journalist. I looked at his samples from and thought wow---this guy is no slouch.

That was the beginning of a great friendship because the folks at Parts & People were just as impressed with him as I was. They immediately hired him to primarily interview the owners and managers of mechanical and collision repair shops nationwide.

He was the perfect person for the job---he loved cars, he was an excellent writer and he never missed a deadline.

So, that’s why I was deeply saddened when I found out Dick DeLoach, 76, died in Novmeber in Southern California from COVID-19.

The Automotive Service Councils of California (ASCCA) and its ASC Educational Foundation (ASCEF) launched a scholarship in his name immediately after his passing.

Dick worked in the automotive industry as an editor, writer, blogger and photographer for a number of industry publications, and contributed his time and efforts to industry organizations.

He was a regular contributor for consumer and trade publications, such as the aforementioned Parts & People, as well as DUB Magazine, Lowrider, Truckin’, Street Trucks, King of the Street, Street Low, Speed Style Magazine and Hotrod Hotline, among others.

Dick was well-known for writing articles that specialized in technology, product guides, how-to articles, celebrity profiles and business features, as well as covering national and regional industry events like SEMA, AAPEX and NACE every year.

He began writing for Lowrider Magazine as an original staff member, instrumental in covering the lowrider movement back in 1977. He eventually became the technical editor...

...for the magazine and played an integral role in its rapid growth and popularity.

The Dick DeLoach Memorial Fund will award scholarships ranging from $500 to $1,000 to California high school seniors who plan to enroll in post-high school technical and academic training, and California college undergraduates in the automotive service field.

Dick had been a trustee of the ASCEF, and he spent a long career writing about the automotive aftermarket, including numerous ASCCA member shop business profile features and ASCCA event coverage. More than that, Dick became part of the fabric of the association and was one of its prominent cheerleaders.

“Dick was a leader in the automotive community and an integral part of the ASCEF Board of Trustees---he will be missed,” he said. “I’m proud to have a scholarship that will not only honor his commitment, but also continue to support young professionals through this fund.”

Automotive reporter Jay Sicht worked with Dick at Parts & People and appreciated his advice over the years.

"When one of us at Parts & People asked him for help with a new initiative, copy lead or contact person for an advertising pitch, he always cheerfully offered his assistance and expertise. His passion for the industry was apparent in his writing and through the many friends he made, including through his involvement in the Automotive Service Councils of California. He is missed by many.”

"He was a contract writer for us and a cherished friend, as well. As a newbie to the aftermarket at the time, Dick was very kind and more than helpful in getting my bearings in the industry and showing me the ropes.

"As a writer, Dick was always on top of what was going on with shops in Southern California and had his ear to ground for good stories,” Merwin said. "He was the consummate professional. More than that, he had the aftermarket running through his veins and cared deeply about the people in it. I will surely miss Dick, as the industry and many connections and people he made in it will undoubtedly too.”

If you would like help honor Dick’s memory, consider donating to this scholarship fund. You can donate by sending a check, noting the Dick DeLoach Memorial Fund, to the ASCCA office at 1 Capitol Mall, Suite 800, Sacramento, CA 95814.