Kniesel's Collision Takes Over for Tomlinson's Shop in Auburn, CA 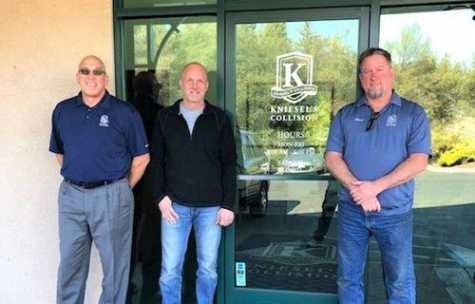 A longtime auto body shop in Auburn, CA, is under new ownership.

Jake Tomlinson and Company, which operated for more than 25 years at 13810 Lincoln Way, is now owned and operated by Kniesel’s Collision, Inc.

The acquisition was made in mid-August and is now operating under the Kniesel’s brand, which began in 1968 in Citrus Heights and has since expanded to nine locations throughout the greater Sacramento area.

“We’re just trying to maintain what [Jake Tomlinson] had going for 20-plus years and keep it as its own little niche,” owner Tom Kniesel said.

Tomlinson’s niche was specializing in repair and body work for luxury rides, such as Ferraris, Bentleys, Rolls Royces and Porsches, which Tomlinson said took up about 35% of his business.

“We got all the fun stuff,” Tomlinson said. “The quality of what we did attracted people from all over the country.”

Kniesel said it’s been a smooth transition, and aside from a new manager, the plan is to keep much of the existing staff left from Tomlinson’s.

“It’s a beautiful facility,” Kniesel said. “It’s honestly one of the easier ones we’ve taken over. He’s got a lot of nice equipment, a nice office, nice front room, the shop’s nice. We really didn’t have to go in and do a whole lot.”

“We weren’t aligned with any insurance companies because we weren’t willing to cut the quality of what we did,” Tomlinson said. “Lots of good memories. It was a really cool experience. We made a lot of good, close friends from all over the country as a result of it.”

With so much extra time on his hands now, Tomlinson plans to catch up on some passion projects that previously took a backseat.

“I’ve got lots of old cars and wooden boats and rental property, so I’m still working 14 hours a day,” he said. “We’ve got a bunch of early American stuff that I’m gonna make street rods out of. … Just fun stuff I’ve been wanting to do for a while.”