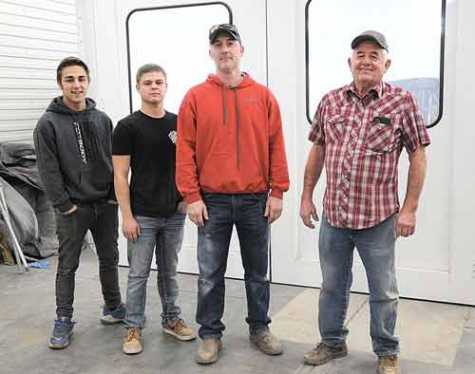 A fixture in the Lovell business community is celebrating its 40th anniversary this year with a new location that has more than doubled the capacity of the former operation.

Gary’s Auto Body relocated from its longtime location on Road 11 southwest of Lovell to 455 Pennsylvania Ave. in Lovell, the site of the former Woodcraft Cabinets and Fixtures business.

Gary Jolley started Gary’s Auto Body in 1980, having worked for Keith Grant at Midway Motors for a few years.

Wife Julie did the books, and all of the kids chipped in over the years.

“All of my boys helped me all the way through, the girls, too, for that matter,” Gary said. “They all know how to work, I’ll tell ya.”

The sixth of Gary and Julie’s seven kids, Danny Jolley, now runs Gary’s Auto Body, though Gary is still a part of the operation.

Though he has run the business since 2003, he said it feels like it’s always been a part of his life.

“I always liked to play like I ran the business,” he said. “I would even make estimates. Bryan (brother) and I would mess around painting bikes and tinkering.”

“My kids had to build their own vehicles to drive,” Gary added.

Danny admitted he was sometimes more “headache than help” as a kid “helping” his dad in the shop, like the time he helped straighten brand new headlight covers for a Corvette — with a hammer.

“In my mind they were the old ones,” he said.

Previous Page Next Page »
Read 438 times
back to top