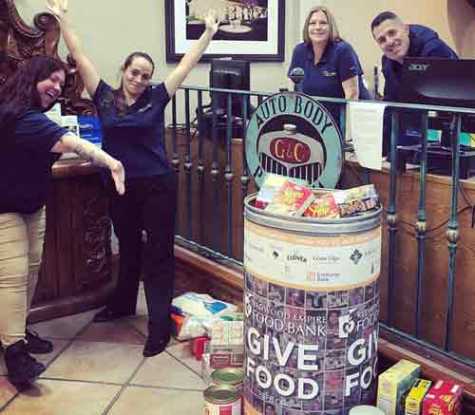 Since 2014, G & C has donated 274 barrels of food to local food banks, as well as donating $100 for every barrel filled by their employees and guests. G & C Auto Body

If you met the late Gene Crozat, founder of G & C Auto Body, an MSO with 15 locations in northern California, you knew right away he was bigger than life.

With his gray mustache and a big smile, he wasn’t afraid to tell you he had the best shops in the area. He also had a passion for making the collision repair industry better by working with trade organizations and political representatives and by giving back to the community in every way possible.

Crozat started the Crozat Family Foundation in 2004 and it’s still going strong. He used to like to say that “it is our responsibility to help our fellow men.” It all started as a ‘Car-A-Month Giveaway’ on various local radio stations and has grown into a foundation that provides different levels of support to the individuals and families they encounter when they meet through the company’s various car giveaways, according to the foundation’s web site.

There have been a few setbacks for the Crozat family within the last few years, but the business is still growing. Crozat passed away right around Thanksgiving in 2016 and all of his remaining family members lost their homes during the North Bay fires.Teri Crozat had just recently purchased a home to be near her children and grandchildren, but had yet to move into it before it burned down.

One thing that Gene taught his four children (Shawn, Josh, Jamie and Patrick) and even his beloved granddaughter Maddie is to make helping people a priority. Crozat took philanthropy to the next level, giving people cars, cash and even jobs at one of his shops in some instances.

Sometimes Crozat would think outside of the box with his charitable efforts. He gained national acclaim for a program he started more than two decades ago when he received a parking ticket unfairly. So, he started the G & C Meter Beaters in downtown Santa Rosa, CA.

During the ten days right before Christmas, the G & C Meter Beaters saved drivers from getting parking penalties by feeding their meters before the City of Santa Rosa’s parking enforcement officers were able to nail them with a $33 parking ticket.

View the embedded image gallery online at:
https://www.autobodynews.com/index.php/western/item/19099-g-c-auto-body-never-stops-giving-back.html#sigProIde15168c2c7
back to top