Written by Nick Sestanovich, The Reporter 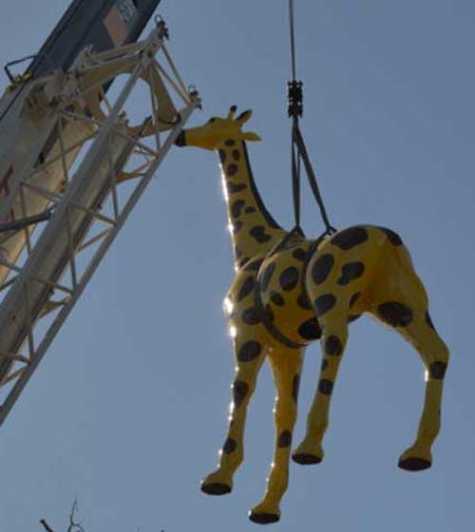 Patch, the Nut Tree giraffe, gets lifted by crane back to his original spot outside the carousel. Ptach had undergone repairs as a result of a car accident in August. Nick Sestanovich, The Reporter

Few stories are as heartwarming as seeing an animal return to its natural habitat.

That feeling was captured Tuesday, July 23, when the famed fiberglass giraffe returned to its rightful place outside the Nut Tree carousel in Vacaville, CA.

To mark its return, the previously nameless giraffe was finally given a name. Due to the top results in an online poll, the long-necked wonder was officially christened “Patch.”

The name is appropriate, given that the sculpture is not only covered in patches but had spent the last four months getting patched up. Back in March, Patch had both of his feet knocked off following a car accident in the Nut Tree Plaza, which also caused minor damage to the carousel and railroad tracks.

Patch was subsequently airlifted to Bernie’s City Garage where he would spend the next three months undergoing repairs. David Spencer, lead technician at Bernie’s, said he was recommended for the task after receiving a call by local artist Lisa Rico.

Although Bernie’s is an auto body shop, Spencer had previously done clear-coating on the fiberglass rabbits used in the 2015 Vacaville Museum fundraising event “We Know Jack,” in which local artists created art pieces using the rabbits. The giraffe was a larger project, but Spencer said he was able to manage it.

“It wasn’t bad, other than the size,” he said. “It was hard to move it around, but the way we repaired it and the way we painted it was the same as we would a car.”

Spencer and his crew not only repaired the feet but stripped off the original paint to give Patch a darker coat. Following the rehabilitation, Patch was laid onto the bed of a Lister Construction truck on July 23 where he was driven over to the Nut Tree Plaza and lifted on a crane back to his original spot.

Several were on hand to witness Patch’s return, including patrons of Peet’s Coffee and STEM summer camp students at the Academy of 21st Century Learning who cheered from the sidelines.

Julie Davis, the manager of Dunhill Partners, which itself manages the Nut Tree, said she was excited to have Patch back.

View the embedded image gallery online at:
https://www.autobodynews.com/index.php/western/item/18113-bernie-s-city-garage-in-vacaville-ca-repairs-giraffe-sculpture.html#sigProIdf57e3ca7f1
back to top