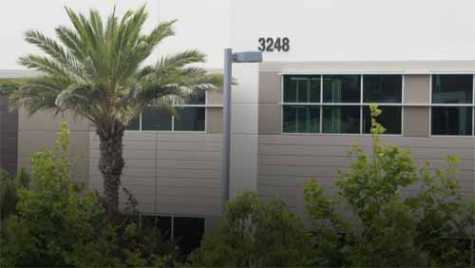 Auto giant Tesla is expected to open its showroom and service center at 3248 Lionshead Ave. in Carlsbad in September. The City Council approved a specific plan for the automaker during its June 25 meeting. The Coast News Group

The City Council granted approval June 25 for the Carlsbad Raceway Specific Plan allowing the Carlsbad Industrial Park a conditional use permit for Tesla, an electric vehicle company, to develop a dealership and repair shop at 3248 Lionshead Ave.

The site is 125 acres and includes all 28 lots with a 54,000-square-foot building, which includes 35,000 square feet for an electric vehicle repair shop.

As part of the specific plan, only electric vehicle sales are permitted. Sales of hybrid vehicles are not allowed.

Carlsbad will be the fifth location for Tesla in San Diego County, according to the company’s website. There are two service centers, one in Oceanside and the other in Kearny Mesa, while there are two stores and galleries at San Diego UTC and Mission Valley. The Carlsbad location will be part showroom and service center.

Angie Prowse, Tesla’s lead architectural manager in North America, said the showroom will consist of all Tesla models, although customers have the option of ordering their vehicles either on site or through the company’s website.

Delivery of the vehicles will take place at the Carlsbad location. As for the city, she said the company, which was founded by Elon Musk in 2003 and is based Palo Alto, has been attempting to break into Carlsbad for some time.

The company has pulled its permits and is expected to open in September.

“Carlsbad is a very large market for us and we’ve been trying to get into this city,” Prowse said. “We are extremely excited to open this location and serve our customers who currently have to travel further distances to get their services.”

Tesla did look at potential spaces at Car Country, however, nothing fit the needs of the company. Car Country is an anchor for the city’s sales taxes and a popular destination among many living throughout the county.

“The spaces that were available at the time we were performing our real estate search did not align with our needs,” Prowse said. “The property we are leasing out is in line with what we are hoping to move forward with and not extremely different from any other location around the globe.”

While Tesla will be several miles away, the council also asked about the collection of sales taxes, especially since many Tesla customers order online. Prowse said it depends on the city where the car is registered as to who collects those taxes.

Regardless, Bill Hofman of Hofman Engineering and Planning, who is working with Tesla on the specific plan, said the company is an ideal fit for the city.

“Tesla is the epitome of a clean and environmentally sensitive use and will have a very low ecological footprint,” he said. “It’s in perfect harmony with the city’s and state’s goal of lowering carbon emissions into the air.”

According to a recent report from Bloomberg, Tesla is could set a company record for vehicles delivered in the second quarter, with estimates between 90,000 to 100,000.

We thank The Coast News Group for reprint permission.