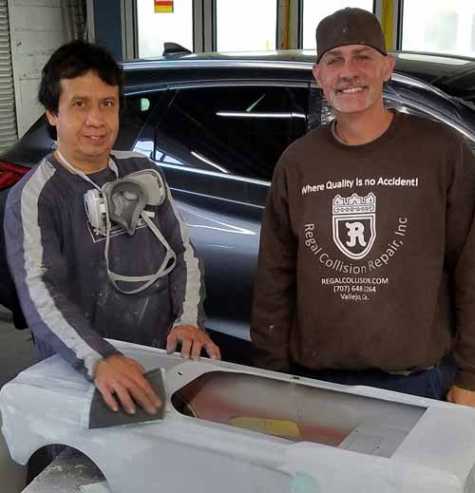 A children's old pedal car looked like this before its amazing conversion into a car tower. From left, Technicians Harry Olcott and Jesus Marquez worked on this Mardi Gras-themed creation. More than a dozen members of the crew dedicated approximately 120 hours into this year’s project. Ed Attanasio

Cats, as we know, can be a little persnickety, but felines from all over the North Bay Area would have undoubtedly purred when they saw a cat tower created out of a children’s toy vehicle by Regal Collision and their crew in Vallejo, CA, for a pet fundraiser.

Canines and the collision repair industry are a natural fit and that's why there are so many body shop dogs working for free as they help their crews all over the country. But, cats are also present at shops nationwide and that’s why Regal Collision gave them some love this year.

Since a few months ago, the crew at Regal Collision converted a children’s toy into a cat tower on wheels and named it “Jester’s Regal Ride”. This year’s fundraiser was named “Mardi Paws” and held by the Humane Society of the North Bay (HSNB) on June 8 at Coal Shed Brewery at the Mare Island Brewing Company in Alameda, CA. More than 400 people dressed up in their finest NOLA-inspired attire, and purchased special light-up drinkware, trinkets, colorful masks and beads on site to help attendees get into the “Big-Easy” vibe.

For the past decade, the crew at Regal Collision, led by Production Manager Kirk Kapfenstein, has been designing and constructing a vehicle or other pet-related piece of usable art for this fundraiser. Every year, they always steal the show.

In past years, they made a dog habitat that looked like a Greek temple on wheels; a pirate-themed pet habitat called “Pirate’s Ride” that contained a fully operable fish tank; “Snoopy’s Camper” for the gala in 2014 entitled “Woodstock—Peace, Love and Pets” and a cat tower they called “Cruisin’ Down the Road” for a Wizard of Oz inspired fundraiser.

When it comes to helping pets in their community, Jim and Shellie Boyle, the owners of Regal Collision Repair never paws for a millisecond when it comes to supporting pet organizations in their area. The Boyles step up and support the HSNB through their participation in its annual gala and auction and other activities.

View the embedded image gallery online at:
https://www.autobodynews.com/index.php/western/item/17972-regal-collision-in-vallejo-ca-gets-major-meows-for-cat-tower.html#sigProId36ad095763
back to top