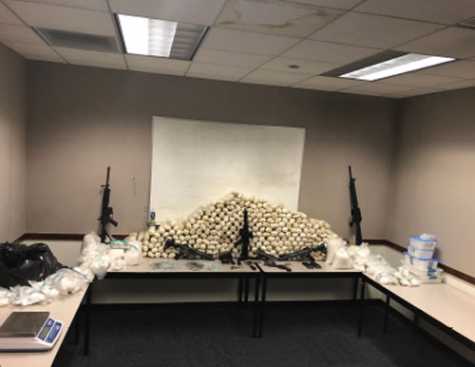 Law enforcement officials seized 500 pounds of methamphetamine worth $1.25 million and multiple firearms at an Apple Valley auto body repair shop after a months-long investigation. Courtesy of the Alhambra Police Department

More than 500 pounds of methamphetamine, multiple assault rifles and “bulk U.S. currency” were among the items seized amid a multi-agency drug investigation that led Southern California and federal authorities to an auto body shop in Apple Valley, California.

The seized meth had a street value of $1.25 million, according to several Southern California-based news outlets.

Manuel Gallardo, of Apple Valley, and Daniel Gonzalez, of Ontario, were arrested in connection to the investigation, which also led officials to an auto body repair shop. There, they also found 40 grams of Fentanyl and handguns, according to a statement released by the Alhambra Police Department.

Jail records show that Gallardo, 55, and Gonzalez, 21, were arrested in the 22500 block of Tussing Ranch Road, a rural residential section of Apple Valley that becomes unincorporated San Bernardino County east of Central Road.

The men were booked on suspicion of possessing methamphetamine with intent to sell, transporting meth for sale and possessing meth, while armed following a two-month-long joint investigation into drug trafficking by the Sinaloa cartel that involved the Alhambra and West Covina police departments, the California Highway Patrol and the Drug Enforcement Administration, according to the news outlets.

Among the seized items were five M4 and M16 rifles, six handguns and $38,000 in cash, according to the statement and news outlets.

Gallardo was released on bail on Sunday, according to jail records. Gonzalez is being held at the High Desert Detention Center in lieu of $350,000 bail.

The San Bernardino County District Attorney’s Office filed charges against both men. Their cases are being heard in the Victorville Superior Court.

Gonzalez pleaded not guilty to multiple felony counts. Gallardo, meanwhile, has not yet entered a plea. Jamie Cimino, deputy district attorney, told the Daily Press that Gallardo’s arraignment was delayed because he posted bail before formal charges were filed against him.

His initial court date has not been scheduled, court records show. An ex parte motion was filed for “reexamination of bail.”

Cimino said the motion will “ensure that bail is not coming from any sort of illegal means.”

We thank the Daily Press for reprint permission.