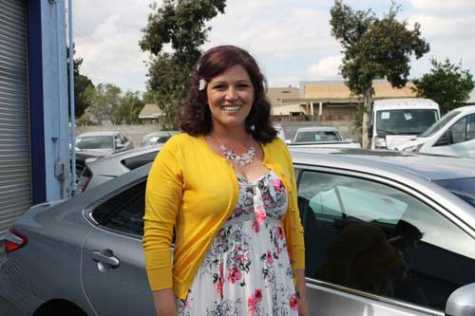 Ilona Smetana, a Navy veteran who had been without a car for three years, stands next to a fully restored 2015 Toyota Camry, which was presented to her by Royal Collision Center.

Ilona Smetana has gone through many hardships in recent years. Now, with help from a big donation by a Fontana, CA, company, she is moving forward on a positive path.

Royal Collision Center provided Smetana, a U.S. Navy veteran who is raising three children, with a 2015 Toyota Camry during a special presentation on April 4.

Smetana, who had been without a car for three years, was extremely grateful to be chosen to receive the Camry from Jose Magdaleno and Anna Hernandez at Royal Collision. They had originally told her the car would be a 1999 model, so she was quite surprised on the day of the event.

"I am speechless," Smetana said. "I wasn't expecting something this nice and this new."

Royal Collision got the disabled but salvageable car through California Casualty insurance company and restored it in prime condition as part of its commitment to serve the local community through the National Auto Body Council's Recycled Rides program.

Hernandez and Magdaleno had been looking for a worthy person to receive the donation. Danny Marquez, president of the Fontana nonprofit group Veterans Partnering with Communities, identified Smetana as being an ideal choice.

"Honestly, I'm pretty surprised that I'm getting this opportunity. There are people out there who need a car a lot more than me," Smetana said.

Smetana, who several years ago served in the Navy at the Marine Corps base at 29 Palms, later endured the pain of homelessness. With the help of relatives as well as the U.S. Department of Veterans Affairs, she was eventually able to get a home and attend college. However, there was one more obstacle.

"My car was totaled, and I didn't have money to replace it or buy another one," said Smetana, who was forced to continually ride buses for long hours.

But now that problem has been solved in a terrific way, thanks to Royal Collision.

"Royal Collision is a really tremendous asset to our community," Marquez said. "They treat you like family."

As a result, Smetana's family is overjoyed.

"I'll use the car mostly for school and whatever my kids want to do on the weekends," she said. "The first thing my daughter wants to do is go to Six Flags."