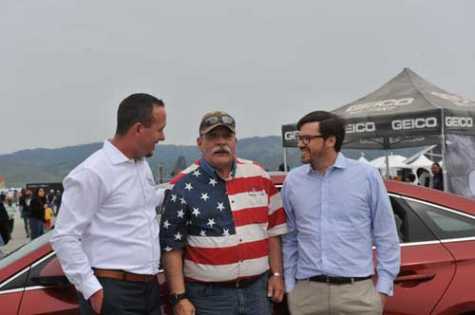 Through the noise of the California International Airshow Salinas, a small group gathered the afternoon of March 24 in the middle of the municipal airport’s tarmac to gift U.S. Army Green Beret veteran Lawrence Duke “Frosty” Frost a car.

Frost, a 63-year-old Prunedale resident, served in the military for 23 years in special operations in Vietnam and as part of Desert Storm.

At the gifting, Frost's friends and family stood by as he received a salvaged 2016 Hyundai Sonata.

“This is going to put me back in the game,” he said of his new car. Frost, who has been without work for some time, said his new car will let him find more reliable jobs, including Uber or Lyft driving.

The donation was made in part for Frost's volunteer service through the Monterey Bay Veterans, where he transports those with disabilities around the WeatherTech Raceway Laguna Seca despite his own trouble without a car.

Frost had an older altered vehicle, but the engine died six months ago. Since then, he has had to rely on public transportation to get to events and appointments.

The partnership donates about 300 cars per year, according to Kyle Strom, a manager in GEICO’s auto damage department. Repairs, on average, cost about $10,000.

For Maria Cid, assistant director of communications for the Sports Car Racing Association of the Monterey Peninsula, Frost is fully deserving of the new car because of his time donated at Laguna Seca at every racing event, often working 12-to-14-hour days.

“Without him and people like him, there’s no way we could do what we do,” Cid said.

His niece, Jeanne Paynter, an Army veteran as well, traveled from Ft. Hunter Liggett to see Frost receive the car. Before serving in Afghanistan, Paynter said Frost saw her off to basic training and has helped her since her return.

"This is awesome," Paynter said. “He’s usually the one helping, not the one receiving help.”

Next to Frost's new car, a covered 2015 Sonata stood by at the airshow on March 24. Another veteran from the Hollister area set to receive the vehicle couldn't make it to the gathering.

We thank The Salinas Californian for reprint permission.

View the embedded image gallery online at:
https://www.autobodynews.com/index.php/western/item/17410-nabc-recycled-rides-donates-car-to-prunedale-ca-u-s-army-veteran.html#sigProId4a70f582f4
back to top