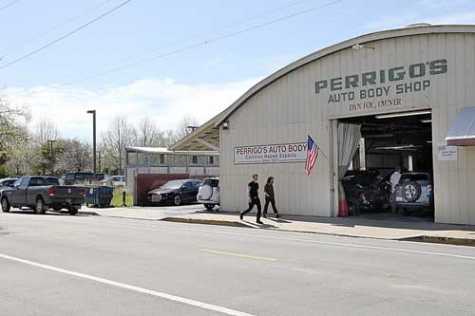 Perrigo’s Auto Body Shop owner Dan Foy threatened to sue the city of Santa Cruz if a homeless encampment were opened in the parking lot next to his shop. Dan Coyro — Santa Cruz Sentinel

A city parking lot may soon be converted into a pilot “dusk-till-dawn” safe sleeping program, the latest effort to provide alternatives to a large unsanctioned city homeless encampment near Highway 1 and River Street in Santa Cruz, CA.

During a special meeting the afternoon of March 19, six potential sites around the downtown “core” were narrowed to the city-owned “lot 24,” a long rectangular property north of Depot Park, between Chestnut and Washington streets. Staff from the city manager’s office suggested the city pursue a 50-person sleeping program taking over about 52 parking spaces from about 9 p.m. to 6 a.m., run by a nonprofit or faith-based organization, that will be broken down during the daytime. Officials said they did not have time to engage with community members about the alternative model, a full-blown 24/7 “transitional” encampment.

If the homelessness effort goes as planned, the safe sleeping and storage program would open at the same time as a planned 60-space Salvation Army-run tent encampment at the former River Street Camp, 1220 River St., by April 17. Helping to expedite the effort will be an updated homeless shelter crisis declaration, updated and approved by the council March 19. April 17 has also been set for the closure of an unsanctioned tent encampment of more than 150 people behind the Gateway Plaza, dubbed by some as “Camp Ross” after the nearby shopping center’s anchor tenant and closest camp neighbor, Ross Dress for Less.

Prior to the March 19 decision, city officials gave the Santa Cruz City Council an extensive list of factors leading each site’s identification, from compatibility with the surrounding environment and physical constraints to environmental impact and access to transit. None, however, said city Economic Development Director Bonnie Lipscomb, is a “perfect site,” nor, said Assistant to the City Manager Susie O’Hara, will the program serve as a “silver bullet” for homelessness.

“I think one of the challenges of looking at the central core is that, I mean you could say that all of these sites are going to have some impact to schools or daycare, preschool facilities,” Lipscomb said. “These sites, particularly, being in city control and looking at adjacent uses, we felt were the best suited, with those considerations in mind. But we can’t say for certain any site is completely not impacted.”

View the embedded image gallery online at:
https://www.autobodynews.com/index.php/western/item/17387-santa-cruz-ca-identifies-parking-lot-for-pilot-safe-sleeping-site.html#sigProIdc06696f5f1
back to top