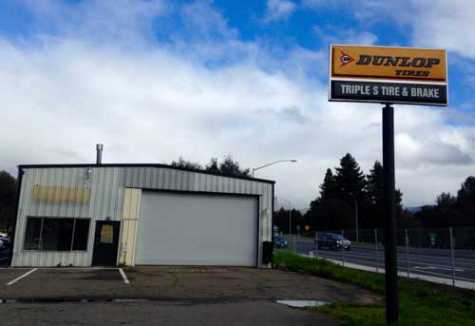 The city of Ukiah's Planning Department granted a permit for an auto body repair shop to open in an empty building on Talmage Road at Airport Park Boulevard. Justine Frederiksen — Ukiah Daily Journal

After determining its appearance would meet the city’s design guidelines, the city’s Planning Department granted a permit for an auto body repair shop to open in an empty building on Talmage Road at Airport Park Boulevard in Ukiah, CA.

Zoning administrator Craig Schlatter, who also serves as the city’s community development director, approved a permit earlier in March for Jeff Yokum of Willits to operate an “auto body shop for auto repairs, towing and car rental services” in the existing 7,000-square-foot building at 550 Talmage Rd. The building was previously occupied by a muffler shop, welding shop and a towing company before Triple S, which closed late last year.

Yokum has operated Yokum’s Auto Body in Willits since 1991 and seeks to open a second location in Ukiah. He plans to install more than a dozen work stations for repairs, painting and disassembly to allow for 14 vehicles to be worked on at once. City staff noted that “all repair work and painting will be conducted within the building, and each work station is designed with a system to fully contain all paint fumes and debris.”

Yokum said the business will be part of the “CARSTAR chain of auto body shops” and will be called CARSTAR Yokum’s Body Shop. Yokum added that most of the businesses in the chain are painted with a “two-tone” mix of a deep red and dark gray.

“When I looked at the application, everything looked pretty good, but it wasn’t clear to me what the front of the building looked like, and that would be the part facing Talmage Road,” said Schlatter, describing the building as being “in a very visible part of our city, in one of our gateways” off Highway 101.

“Our understanding is that (the section facing Talmage Road) would look similar to the rest of the building because the colors would wrap around the building,” said planning manager Michelle Irace, adding that the building was originally going to be painted “red and darker colors, but it was adjusted later to be more harmonious” with the other buildings in the area.

“Historically, something like this would go to our design review board, and I’m not super comfortable about making an approval without seeing any drawings of the front, given the visibility of this location,” said Schlatter, adding that while he was granting approval, he was adding a condition that “given the visibility of this location, I want renderings (of the front of the building facing Talmage Road) to be submitted to staff, who will evaluate whether they are compatible with the city’s design guidelines. And if there are any questions from staff, then the project will be referred to the design review board.”

Schlatter said the plans have been submitted, his staff has reviewed them and the project has been approved without needing to go before the design review board.