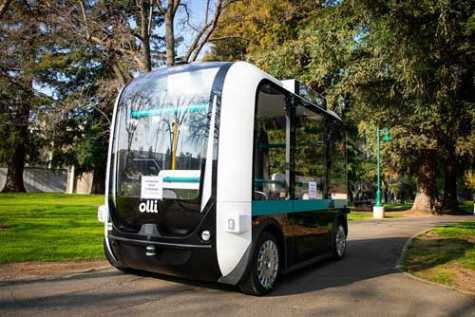 California State University (CSU) Sacramento is welcoming a new addition to its campus in February: an autonomous shuttle named Olli.

Olli is on loan to the university from Arizona-based Local Motors until the end of the 2019 spring semester.

The university was one of two winners in the first Olli Fleet Challenge last September. In this competition, Local Motors invited businesses, campuses and local governmental bodies in the Sacramento, CA, and Phoenix, AZ, area to propose a plan for a three-month use of the electric self-driving vehicle.

In Sacramento, two eight-passenger Olli shuttles will be transporting students on a paved route between Amador Hall and Bay Laurel Way.

“The companies that run these automated vehicles are not yet ready to share their data publicly with us,” Pande said. “We could get access to that data if we had these shuttles on our own campus. With this data, we would definitely benefit and be able to more precisely estimate what the benefits of those vehicles might be.”

Despite the potential for a positive impact, Pande said he does not see autonomous shuttles coming to Cal Poly any time soon.

“We are a ways away from that,” Pande said. “We are not at a point where we could have them running right now. It’s something that has potential but not something that could happen right away.”

This sentiment was echoed by university spokesperson Matt Lazier.

“At a surface-level look, [those in Transportation and Parking Services] believe it would be difficult to make something like [Sacramento State’s autonomous shuttles] work here because of the dearth of road capacity on campus,” Lazier wrote in an email to Mustang News.

View the embedded image gallery online at:
https://www.autobodynews.com/index.php/western/item/17122-csu-sacramento-to-add-on-campus-self-driving-shuttle.html#sigProIdd072d9b324
back to top