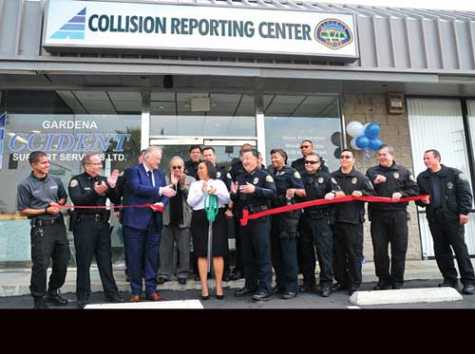 In a ribbon-cutting gala, the city of Gardena, CA, and its police department hailed the opening of the first-ever collision reporting center in the state of California as a “windfall” for motorists in non-injury “fender-benders” and car crashes that occur within the 6.6 square miles of Freeway City.

With press statements, Mayor Tasha Cerda, Police Chief Thomas Kang and Steve Sanderson, president of the CRC Accident Support Services International Ltd., cut the ribbon and opened the doors Jan. 10 to the collision reporting center on the corner of Western Avenue and 162nd Street. The center is a “pilot” platform that could fill a need that might seem overdue.

“This will streamline the process of collisions and fender-benders in the city, and it takes it to the next level when dealing with insurance companies,” said Mayor Cerda.

“I am very excited about being the first city in California to have a referral center for traffic accidents,” said Chief Kang, who credited the pilot program to Ed Medrano, former GPD chief and now city manager, during the 20-minute press conference.

Sanderson claimed the center would deter insurance “fraud” with its efficient protocol for “photographing, documenting and measuring” non-injury traffic collisions “while inputting the data into a state-of-the art software program for analysis."

Kang earlier stated in a release that ASSI will “help simplify the collision reporting process and allow officers to be more proactive in the community as a result of having additional time to respond to more pressing issues.”

Free of charge to the local government and citizens, the CRC services, according to the release, provide support that insurers writing out automobile policies in California require to fund the program. Traffic crash reporting has moved from the side of the road to a safe and comfortable facility. This reduces the potential for secondary collisions that result in needless injury or death of citizens and police officers. Traffic congestion will be alleviated by this new procedure.

Non-injury traffic collisions in Gardena average about 1,100 per annum, and approximately 700 hours of officers’ time are devoted to the process of assisting motorists with exchanging information, according to Lt. Steve Prendergast, GPD public information officer.

“It’s a win-win. The insurance companies appreciate it as well because they receive a more detailed report on the collision and the center assists drivers with filing their claims in a more timely manner,” said Prendergast.

There is a four-step procedure, suggested by ASSI, that motorists in these collision accidents should heed and follow. This includes removing the vehicle(s) from the roadway, exchanging information with other parties and going to the CRC and submitting documentation such as driver’s license, vehicle registration and insurance.