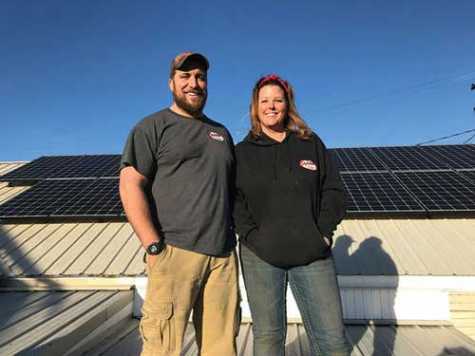 Eric and Gretchen Heise stand in front of the installed and functioning solar panels on top of the buildings of Eric's Auto Body. Photo provided by Eric's Auto Body & Glass LLC for Whitman County Gazette

Eric's Auto Body in Colfax, WA, has become the first "solar" collision repair center in the area. Another one of the few shops is located in southern Idaho.

"We capitalize on the sun," said proprietor Eric Heise. "We are producing our own power!"

The solar panels and a 24-kilowatt system were installed starting in late October and started producing power in December.

Forty solar panels, each capable of generating up to 300 watts of direct current (DC), have been installed on top of each of the two shop buildings for a total of 80 panels.

The Washington-made panels use photons from the sunlight to push electrons down wires into solar cells, which is called the photoelectric effect.

Electricity from the panels goes through an inverter to convert the power to alternating current (AC).

Eric's Auto Body uses an inverter to change the DC power they collect to AC power and send the power back to the utility power grid.

"During the long summer months, we expect to generate more power than we can use," Heise said.

They will be able to trade any excess power to Avista for credits against their winter usage.

Last year, Avista offered an incentive program that made the installation possible.

After the panels were in place, Avista installed two new meters: one to read the solar panels production and the other to read the output from the buildings.

In the last month since Avista installed the new meters, the auto body shop has used 10.6 kilowatt hours and been credited with 7.22 kilowatt hours.

Heise said the building that houses the painting shop, which is fitted with the paint "bake booths," consumes far more electricity than the body shop, so he anticipates the paint shop building will be less likely to produce solar power in excess of what it consumes.