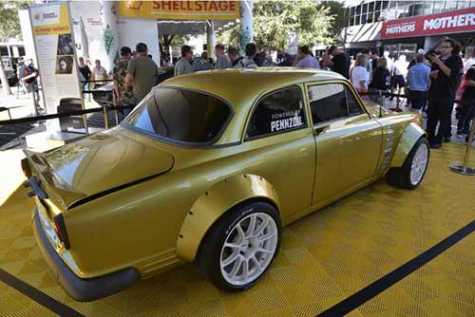 The V06 is a one-of-a-kind vehicle that combined a 1963 Volvo 122S Amazon with a 2013 Grand Sport Corvette from Copart. It was unveiled at the Shell “Pioneering Performance” Pavilion at this year's SEMA Show.

To create the vehicle, affectionately called the “V06," Allen combined a 1963 Volvo 122S Amazon with a 2013 Grand Sport Corvette from Copart. It will be auctioned off to raise money for the SEMA Memorial Scholarship Fund, which provides financial assistance of up to $5,000 to help foster the next generation of automotive aftermarket industry leaders and innovators.

“The V06 isn’t the normal classic car build. I wanted to do something special---never-been-done-before---for the SEMA Memorial Scholarship Fund,” Allen said. “This is a car that makes you look twice but can also perform like a beast. Our test drives have been phenomenal.”

Over the last few months, Allen’s Flat 12 Gallery team transformed the Volvo 122’s 85HP performance level into a 600HP beast that makes full use of the Pennzoil Synthetics under the hood, a Lingenfelter Built LS7, Forgeline Wheels and Baer Brakes.

After a cross-country tour, the V06 will be auctioned off by Barrett-Jackson. All proceeds will benefit the SEMA Memorial Scholarship Fund, which offers financial assistance to students pursuing an automotive career.

“It was very exciting to see this build come to life,” said Mark Henry, brand communications and influencer manager for Shell Lubricants. “Shell and Pennzoil are privileged to work with Jeff and the SEMA Memorial Scholarship Fund to help young people pursue automotive careers.”

The end result is what Allen considers to be the ultimate “enthusiast” car, capable of competing in a plethora of events from road rallies, airstrip attacks, autocross events, drag racing and drifting. The V06 is the type of car that enthusiasts could take out every weekend to compete at different events.

In addition to being the owner of Flat 12 Gallery---a boutique that features a facility that has had hundreds of unique builds, movie cars and celebrity-owned rides under its roof---Allen is a car guy, the host of the iTunes podcast “Skidmarks Show” and the former host of “The Car Chasers” on CNBC.

The SEMA Memorial Scholarship program, a 501(c)3, is dedicated to activating the next generation’s automotive workforce by providing financial support and career resources to students, schools, educators and programs that benefit the professional development of young professionals enrolled in various high schools, universities, colleges and/or vocational schools in the United States. Students who are interested can apply for the scholarship at sema.org/scholarships.

View the embedded image gallery online at:
https://www.autobodynews.com/index.php/western/item/16609-jeff-allen-builds-unique-vehicle-for-sema-memorial-scholarship-fund.html#sigProId1d3b2181b7
back to top