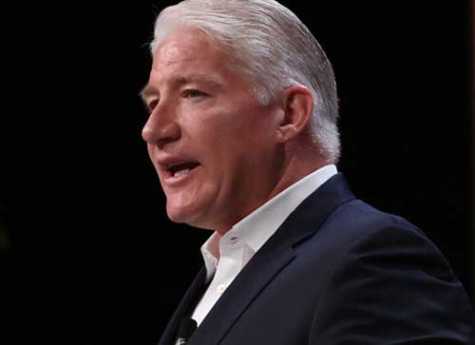 CNN’s John King and political strategist Karl Rove gave their views on how tariffs could impact the automotive aftermarket industry during the grand opening keynote breakfast at AAPEX 2018 in Las Vegas.

King said the country is experiencing low unemployment and a booming economy, but there is national anxiety and both Democratic and Republican parties are facing an identity crisis. The mid-term debate is about taxes and jobs, trade, healthcare, immigration, tweets and tone.

King said the great unknown is what will happen post-elections, such as Special Counsel Robert Mueller’s next move, blue wave subpoenas and if President Trump will be combative or bipartisan.

King concluded, “We are in the age of disruption. President Trump is not the cause, but the amplifier. There is a global divide over trade, immigration and way of life.”

Rove concurred with King on the uncertainty of post-elections.

Referring to President Trump, Rove said, “Who is going to show up in the Oval Office after the elections? We don’t know. We don’t know how he thinks and operates.”

According to Rove, the biggest issues facing a new Congress will be trade and tariffs.

“It’s easy to start a trade war; it’s hard to have a winner,” said Rove.

He stressed the need for clarity on the goal of tariffs, including whether or not it is to protect intellectual property (IP) rights.

In response to an audience question about how long we should expect the tariffs to continue, Rove said he has no idea, but added he worries about the impact on the economy and automotive aftermarket businesses. When asked if the imposed tariffs on steel are working, Rove said, “There are always winners and losers on tariffs. In my opinion, the steel tariffs are not working.”

When asked how the automotive aftermarket gets a seat at the table, Rove encouraged the audience to attend town hall events and fundraisers and invite members of Congress to their businesses.

“Carve out time to be involved in political campaigns. Over time, it will have a huge impact,” he said.

View the embedded image gallery online at:
https://www.autobodynews.com/index.php/western/item/16581-cnn-s-john-king-political-strategist-karl-rove-open-aapex-2018.html#sigProIdf55af1453d
back to top